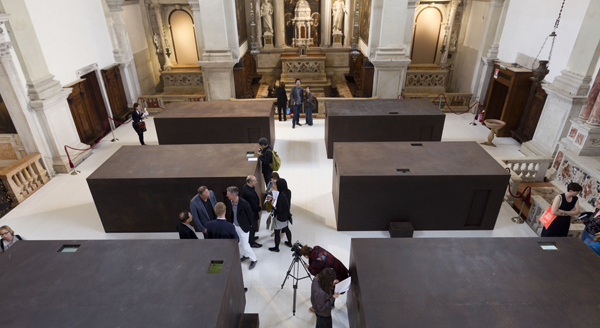 A view of six iron boxes that form part of a work by Chinese artist Ai Weiwei that is being presented at the Venice Biennale of Arts. The work on display is called S.A.C.R.E.D. - standing for supper, accuser, cleansing, ritual, entropy and doubt, and referring to the artist’s 81 days in detention in 2011. [AP/NEWSIS]

VENICE - When a mother views scenes of her son’s imprisonment, sometimes no words are needed. Tears will do.

Chinese artist Ai Weiwei was prevented by Chinese authorities from travelling to Venice for the opening of two of his new works on the sidelines of the city’s Biennale contemporary art show, so his mother came instead.

The activist-artist’s elderly mother, Gao Ying, viewed for the first time on Tuesday a series of dioramas depicting six episodes of intense pressure during her son’s 81 days in detention in 2011.

Gao walked quietly through the exhibit, peering through openings in the 1.5-meter high boxes - inside which the artist had reconstructed in great detail scenes of his captivity. His mother did not speak to journalists who documented the moment, but she was moved to tears as she left the exhibit in the church of Sant’Antonin.

The two events, both site-specific to the Venice spaces in which they are being displayed, are emotionally linked.

Ai constructed the piece “Straight” to be installed in a former convent on Giudecca island in the Venetian lagoon. The piece is made up of about 136 tons of steel rebar that was removed from the ruins of Chinese schools that collapsed in the 2008 earthquake in Sichuan province that killed nearly 5,200 children. Many have blamed shoddy construction practices and outright building fraud for the children’s deaths.

Ai and his team spent two years straightening the pieces of steel. He then arranged them lying flat, one on top of another, to create a new topography inside the Le Zitelle complex, a room where orphan girls once sewed.

Another version of the piece - less than half the size of the one in Venice - was presented at the Hirshhorn Museum in Washington last year; this one will tour North America after leaving Venice.

“He is making something right that was wrong,” said Maurizio Bortolotti, who curated the two collateral exhibits. “I think it is very symbolic. Every piece has seen a human and moral distortion.”

It was Ai’s political activism highlighting corruption in the aftermath of the 2008 quake that drew the ire of Chinese authorities and lead to his detention in April 2011. That included a project to gather the names of all the children who perished as a sort of memorial, said Greg Hilty, curatorial director of the Lisson Gallery in London that collaborated on the Venice projects and which has long worked with Ai.

Bortolotti said the first installation, called S.A.C.R.E.D., has its own iconography similar to that of the Stations of the Cross, depicting the suffering of Jesus as he is led to be nailed on the cross.

“There is a sense of self-doubt. Weiwei didn’t know if any moment could be the last. He wasn’t tortured, but there was a process of trying to break him down psychologically,” he said.

For the installation, Ai constructed six containers in half-scale - recreating scenes from his detention, each revealing the constant surveillance to which he was subjected. Inside six metal boxes, which on their own are a form of minimalist sculpture, Ai created scenes showing himself carrying out the routines of prison life.