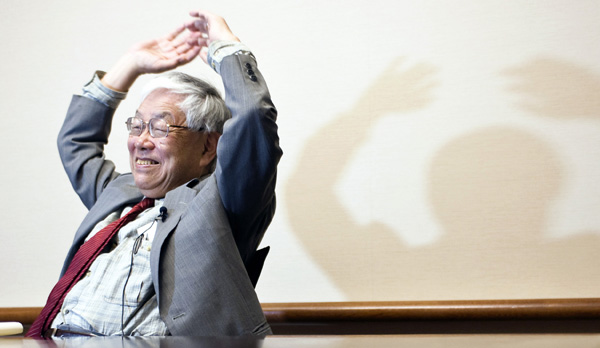 TOKYO - Koichi Hamada, a Yale University professor emeritus of economics and the chief architect of “Abenomics,” said it’s an overreaction to say the Japanese government’s monetary easing policies failed after the Nikkei’s recent 7.3 percent plunge, which was the biggest fall in Japanese stocks since the aftermath of the Fukushima nuclear plant disaster.

The 77-year-old professor said he sees the plunge as a temporary adjustment.

“If you anticipate a further fall [in the Nikkei], are you confident to immediately begin short-selling?” Hamada asked in an interview with the JoongAng Ilbo on Monday.

Hamada said he’s “paying attention” to Korea’s criticism that Japan’s weak yen policies hurt Korean exporters’ profitability, but he added that the Korean government can solve the won’s appreciation by adopting its own monetary easing policies such as lowering interest rates.

“In a floating exchange rate system, each country can take care of itself,” Hamada said.

For the last 10 years, Hamada has called on Japan to take more aggressive and drastic monetary easing policies. Hamada, who lives with his American wife in New Haven, Connecticut, travels Japan once every two months to serve as Abe’s special economic adviser.

In the interview, he refrained from speaking about the future exchange rate of the yen as he’s closely involved in Japan’s economic policies. In a press conference in January he anticipated the yen will stay between 95 yen and 100 yen against the dollar. 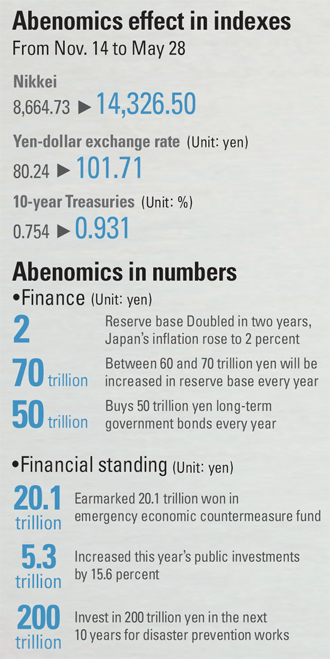 Q. How do you evaluate the first six months of Abenomics?

A. Much better than my expectations. It’s fortunate that a political leader has adopted a large scale monetary easing. Japanese stocks have dipped slightly for days. But in terms of direction, the Japanese economy improved a lot. Seeds for economic recovery in each sector are sprouting now. Taxi drivers who’ve been complaining said their business has improved. It’s important that the atmosphere is changing.

Any doubts about Abenomics are rising as stock markets become insecure?

That’s overreacting. It’s just that Japanese stocks that have seen rapid gains are undergoing temporary adjustments. For those who say this is the end of Abenomics, they can immediately go ahead and start short selling of stocks. Look how high Japanese stocks have gone up since the Abe government was launched .?.?. a 10 percent drop isn’t a big deal. What’s more important is that the increase in asset value will lead to an increase in income and consumption.

The rise in long-term interest rates has fanned a theory that says government bonds will plunge.

But you can’t just welcome inflation with open arms, can you?

Inflation itself isn’t a good thing. It’s like a flu for the public. They should be careful not to get to catch the flu. I heard the pain of fishermen that they can’t take ships out to sea due to surging oil prices. Inflation cannot be good for everyone. If inflation intensifies, the Bank of Japan needs to take action and stop it. You can trust the BOJ to combat inflation when it needs to.

Is Japan triggering a currency war?

There are concerns that the world will suffer global inflation due to all countries taking devaluations of their own currencies. But that’s wrong. That’s a theory that only works in a fixed exchange rate market system. The world doesn’t immediately fall into inflation because of competitive devaluation of currencies. In a floating exchange rate system, laissez-faire [a noninterference policy] is a principle. You’re saying that Japan is igniting a currency war but what about a [high exchange rate] policy that the Korean government took a few years ago? During that period, Japan suffered because of the won’s devaluation.