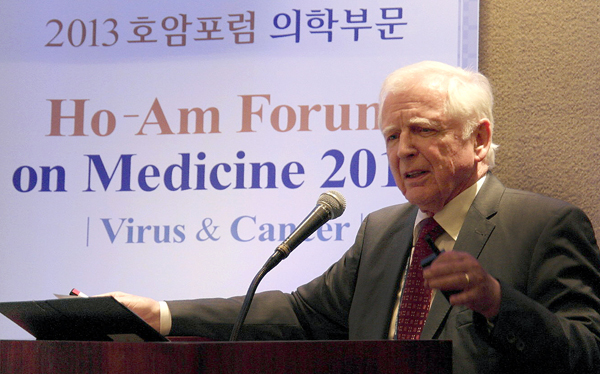 The two-day forum was divided into medical research and science, according to Samsung, and is aimed at providing a platform for scientists and researchers who won major prizes, including Samsung’s annual Ho-Am Prize and the Nobel Prize, to present and exchange their latest research findings.

Also, it is meant to lay the foundation for a global scientific network.

The medical part of the program is run by the Samsung Medical Center, a general hospital arm of the conglomerate, while the science section is led by Samsung Advanced Institute of Technology, a research and development establishment.

Viruses and cancer were the themes of the forum’s medical session yesterday at the Grand Hyatt Hotel in central Seoul.

Harald zur Hausen, 77, a Nobel Prize winner in physiology or medicine in 2008 for discovering the human immunodeficiency virus, gave a lecture on human papillomavirus, or HPV, the major cause of cervical cancer.

Hausen said his current interest is in the possibility of red meat causing cancer. The causal relationship may not be direct because the cause might not be the meat itself, but the viruses hidden inside it, he said.

Countries like Japan and Korea where raw or rare beef is consumed have relatively high incidences of colorectal cancer, he noted.

The lecture was followed by a session on the herpes virus and hepatitis C virus in cancer presented by Jae Jung, professor of molecular microbiology and immunology at Keck School of Medicine at the University of Southern California.

Today, the forum focuses on nano technologies and materials.