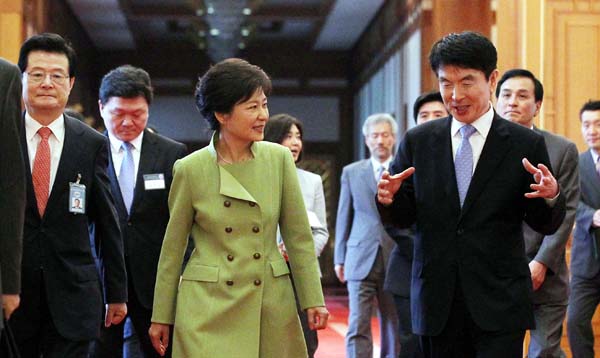 President Park Geun-hye yesterday hosted her first meeting with a powerful economic advisory council and asked its members to support government’s efforts to realize her goal of “70 percent employment and 70 percent middle class.”

The National Economic Advisory Council, with a constitutional mandate to advise the president, consists of 30 experts from the private sector in addition to Park’s five senior aides, including the deputy economic affairs prime minister and minister of science, ICT and future planning.

In her opening remarks, Park said economic conditions at home and abroad are unfavorable and expressed concerns about the prolonged low-growth rate. She also cited Korea’s fast-aging population and risks associated with North Korea.

Korea must fundamentally change its economic paradigm from chasing advanced economies to building a “creative economy,” she said. “We must understand the future trend and other countries’ countermoves preemptively and check on our policy one more time to more aggressively transform the framework of economic policy,” the president added.

At the meeting, Park stressed the role of the National Economic Advisory Council is crucial, saying she has scrapped all other advisory with the expectation the council will play a key role in the comprehensive oversight of major policies.

Park said assessing the Korean economy with an objective eye and evaluating the government’s immediate and long-term policies will be the council’s priority.