The ultimate ‘how-to’ book about cooking

The ultimate ‘how-to’ book about cooking 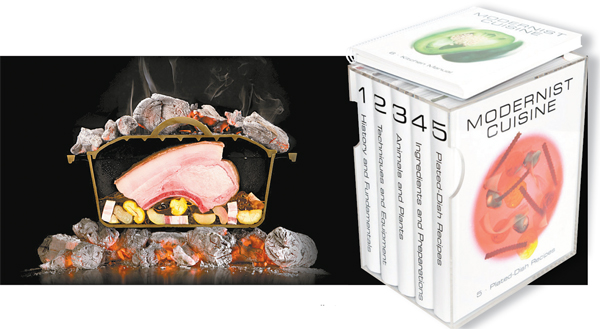 Left: A cutaway photograph of a barbecue technique from “Modernist Cuisine.” Right: The six-volume set. Provided by Intellectual Ventures

When asked to describe his cookbook “Modernist Cuisine,” Nathan Myhrvold, the physician-turned-entrepreneur and chef, offered a few numbers: It is published in six volumes with a total of 2,438 pages and weighs about 44 pounds.

It is an encyclopedic tome coauthored in 2011 with Chris Young and Maxime Bilet that received a cult-like response from chefs, avid amateur cooks and epicures around the world. “Modernist Cuisine at Home” by Myhrvold and Bilet, a more compact 456-page volume, followed a year and a half later. A third volume, “The Photography of Modernist Cuisine,” comes out in October.

“Modernist Cuisine” explains how and why cooking works from a scientific perspective while also exploring the history of food and culture.

The book, he says, is for people who are passionate and curious about food. It is also for chefs who were taught to cook recipes under an apprentice system but run into difficulties when they want to change or do something different because in many cases they do not understand the science behind the cooking. The following are questions and answers from the round-table discussion.

Cholsoo Charles Lho: The book refers to the sous-vide method, a process that has recently become a favorite technique of professional kitchen.

Nathan Myhrvold: Sous vide is cooking at a low rather than high temperature. In most traditional cooking techniques, you cook with flame or with the electrical equivalent of flame. Last night I had Korean beef barbecue. Let’s say I am trying to make the beef 50 degrees Centigrade [122 Fahrenheit]. But its temperature starts at 5 degrees Centigrade from the refrigerator and the heat source, the flame, is probably around 1,000 degrees Centigrade. I had an excellent meal at the barbecue place but the cooking requires very precise timing and a fair amount of the beef is going to be gray, not medium rare. Sous vide says if you want your beef to be medium rare at 50 degrees Centigrade, it allows you to have something completely precise and the same every time. Also, the thickness of the meat doesn’t matter. Because you can cook at a controlled temperature, you can do cooking that could have been almost impossible if you tried to cook conventionally.

Lho: You have been to some Korean restaurants during your visit. The Korean government has invested significant sums to “globalize” Korean food over the past several years. What do you think of Korean cuisine and the way it is marketed?

Myhrvold: One problem with Korean food is that it doesn’t seem to have had good marketing. In the U.S., if you go for Japanese cuisine, it’s very specialized with a wide variety - from sushi to tempura. The same is true for Chinese from Peking to Hunan and Sichuan cuisines. On the other hand, there tends to be only a small percentage of Korean cuisine that has been exported. I love Korean food, but at the same time I am very ignorant about it. Every time I had a Korean meal here, I was served something I never had before. Last night I had soy sauce-seasoned raw crab [ganjang gyejang] and it was great. I often visit well-known Korean restaurants in New York, and I have explored many with David Chang (the Korean-American chef and founder of Momofuku restaurant group) and Coree Lee (a Korea-born chef and owner of Benu, a two Michelin star French restaurant in San Francisco) has taken me to Korean restaurants in the area. But personally I want to experience more. In another way, Korea is already on the forefront of globalizing its food. It already has two dessert chains in the U.S. - Pinkberry and Red Mango. Korean-inspired food trucks are doing well in Los Angeles, and there are some chicken places in New York and Los Angeles. I like fine dining but I also want to visit fast food places.

Lho: You have set a plan to publish a Korean language version of “Modernist Cuisine.” Would you want to do an Asian cuisine version of the book? A lot of its recipes are Western, although I noticed crispy chicken wings Korean style.

Myhrvold: We ran the recipe for kimchi and a couple of other Korean dishes. At our cooking lab, two of the members are Chinese - one Chinese-American, the other from mainland China. Another member is from India. So we have relatively international members, and I love food from around the world. We ran key techniques that could be highlights of each culture, and kimchi is the highlight of Korean cuisine because of the techniques of fermentation.

We also cover cooking with a wok, another fundamental Asian cuisine. I would love to do a “Modernist Cuisine” that more deeply explores Asian cuisine.

Lho: The photos in both the abridged and the six-volume version are astounding.

Myhrvold: I am planning an exhibit [in the U.S.] of “The Photography of Modernist Cuisine” probably this fall. We’d like it to come to Korea, too.