Pioneers of a worldwide ‘market for inventions’

Pioneers of a worldwide ‘market for inventions’

From left, Cholsoo Charles Lho, publisher of the Korea JoongAng Daily, and co-founders of Intellectual Ventures, Nathan Myhrvold and Edward Jung, discuss innovation and patents during a meeting at the Westin Chosun Hotel in central Seoul Tuesday. By Park Sang-moon

Intellectual Ventures (IV) may not be a household name outside the technology sector, but it’s actually one of the top five largest holders of patents in the world, amassing an enormous portfolio of some 40,000 rights to license out.

Having clinched licensing deals with Samsung Electronics, LG Electronics, HTC, RIM and other tech firms - pulling in more than $6 billion in the process - Intellectual Ventures invests in inventions and helps inventors get their fair share, according to co-founders Nathan Myhrvold and Edward Jung. IV also has two spin-off companies: TerraPower, a nuclear reactor developer, and Kymeta, which commercializes the not-so-familiar metamaterials surface antenna technology (M-SAT).

The founders, who met at Microsoft, were on business trip to Korea Sunday to yesterday visiting the Seoul office of IV and discussing the Korean edition of the 2011 “Modernist Cuisine: The Art and Science of Cooking” co-written by Myhrvold.

Myhrvold, a Ph.D. in theoretical and mathematical physics, is former CTO at Microsoft and a serious amateur chef. Korean-American Jung was chief architect and adviser to executive staff at Microsoft before joining IV and holds more than 500 patents worldwide.

Cholsoo Charles Lho, publisher of the Korea JoongAng Daily, had a round-table conversation with IV’s co-founders Tuesday in which they discussed topics ranging from inventions and innovations to the Samsung-Apple patent suit and nuclear energy. The following are excerpts. 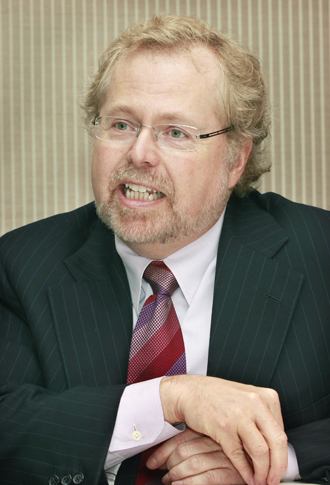 Nathan Myhrvold: Every valuable thing on earth has a capital market that supports it and allows investment in it.

Prior to our company, there wasn’t much of a market for inventions, which are incredibly valuable. It is our goal to be the first “invention capitalist” that supplies capital and creates a capital market around inventions.

Lho: There’s been criticism that IV is the world’s largest patent troll. What is your view?

Myhrvold: There are different philosophies about intellectual properties. When I went to Microsoft, I got the company on the path of filing patents. If you are a company that is used to just copying and using other people’s ideas, it seems very threatening that someone would invest almost $6 billion on patents as we have. Because it seems threatening and different, people criticize it and they call us names.

We call ourselves invention capitalists, and we are pioneering a new market. Private equities started roughly 30 years ago from a very tiny base and grew into something enormous - and they are still being enormously criticized. IV has a model that has simply not been well understood. But I can make a strong argument that in the long run, IV will be beneficial for the industry, the world and for everyone.

Lho: Share with us your opinion on the ongoing patent suit between Samsung Electronics and Apple.

Myhrvold: There is an interesting element in the battle that shows the high-tech world has gone from an era where patents were not a primary way that people competed to one in which they are. Apple was not a very patent-centric company until 10 years ago. Much more recently the company decided that it would use patents to try to enforce exclusivity, one of the rights with patents. That’s a big change from the philosophy and culture of Silicon Valley, where at one point companies basically didn’t pay attention to patents - maybe they filed them but never used them as a competitive tool or weapon. The real issue at this point isn’t so much about Samsung versus Apple but about Apple versus Google. In the Walter Isaacson biography of Steve Jobs, Jobs was portrayed as being very upset about Google’s Android operating system stealing ideas from Apple. The trend of using patents as a competitive weapon isn’t merely about Apple and Samsung. Google bought Motorola for its patent portfolio and has joined patent suits. Yahoo has sued Facebook. The reason is very simple. Major tech firms with patents - Yahoo or Apple - are threatened by new companies such as Facebook and Google. As the industry matures, this is the phase that it goes through.

Edward Jung: Patent wars are more than 100 years old - from the sewing machine to rubber, automobiles, lasers and telecommunications - except in this part of IT industry. Even Thomas Edison, who created a tremendous number of patents, was involved in a lot of lawsuits.

Lho: Although TerraPower may have raised the possibility of a significantly better nuclear reactor, is nuclear energy still the way to go?

Myhrvold: Nuclear energy is something that people have a hard time thinking rationally [about]. While driving to the airport, many people worry about their flights. Statistics show this is absurd: Driving kills so many people, whereas flying is one of the safest forms of transport. But when there is an accident, which is insanely rare, it’s terrible.

The same is true with Fukushima. While the tsunami killed probably 15,000 people, the reactors have killed zero directly. Other kinds of energy kill people all the time. A natural gas generating plant in Connecticut killed 15 people, way more people than Fukushima did.

In the 21st century, we need more power. In the U.S., the total energy usage of all types per capita is 10,000 watts versus a global average worldwide of about 2,000 watts. Broadly speaking, we need to generate five times more energy - a huge step up - in a manner that is safe and secure.

Lho: What would you say has been IV’s biggest success or setback?

Myhrvold: Our greatest success is that the concept of patents and inventions has increased. There are now patent markets and companies investing in patents around the world. In terms of our setbacks, it takes a long time to develop a technology, really requiring tolerance.

Our failures don’t bother us. More than half of the ideas will probably not work. You count successes.

Lho: One of the key goals of the new Park Geun-hye administration is technological innovation for Korea. What advice would you offer?

Myhrvold: For any society to be successful, it’s about how to develop human resources. Korea needs to keep in mind what has kept the U.S. tech sector vital: the new, small, disruptive companies such as Facebook. Microsoft of course was once one of them. The U.S. continues to come up with crazy ideas from Harvard students and others so those companies can grow from nothing into major forces. Korea has been very successful with chaebol, but it’s important for Korea to manage small upstarts.

Lho: I heard you had a tour of Leeum Samsung Museum of Art. What was your impression of the collection, the building and Samsung’s innovative use of technology?

Myhrvold: It was fascinating to see three very different buildings designed by modernist architects, each with a very different vision and juxtaposition. Then you go inside and it has very well curated, lit and displayed collection. I have seen a lot of interactive displays at museums before, but Leeum was by far the best.