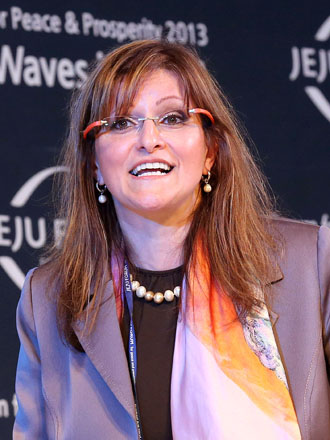 JEJU - “No economy can afford to exclude women,” stated Freda Miriklis, president of the International Federation of Business and Professional Women (BPW International), a business network for women in more than 100 countries, yesterday at a special event ahead of the forum on Jeju Island.

As Korea has seen the election of its first female president, gender equality, as well as the nuclear crisis and tension in Northeast Asia, was a key focus of the three-day eighth Jeju Forum for Peace and Prosperity at the Haevichi Hotel & Resort in Seogwipo, Jeju.

The Australia-born Miriklis, who served as vice president in the United Nations Committee for the Status of Women, stated in a special session, “This is the women’s century of inclusion and women’s equal leadership and participation, where gender equity and women’s economic empowerment become front and center.”

In Korea, nearly 400,000 enterprises are led by women, Miriklis pointed out. She added that according to a Goldman Sachs report, a reduction in barriers to women participating in the labor force would increase Japan’s GDP by 16 percent and could lead to a 14 percent rise in per capita income of Asia-Pacific Economic Cooperation countries including China, Russia, the Philippines and Korea by 2020.

The Jeju Forum, which launched in 2001, officially kicks off today and sees some 3,500 participants including political, business, cultural and academic leaders from 49 countries, according to forum organizers.

This year, the forum, hosted by the Jeju Special Self-Governing Province, along with the International Peace Foundation, East Asia Foundation and the JoongAng Ilbo, carries the theme “New Waves in Asia.”

The theme indicates “With new leadership not only in South Korea but in major countries around the world, the regional order in Asia is being redrawn,” according to Woo Keuk-min, chairman of the organizing committee of the forum and governor of Jeju.

This includes the hot issue of tension on the Korean Peninsula. Han In-taek, director of research at the Jeju Peace Institute, stated at a special session on strategies to manage the security crisis, “No country is facing a greater nuclear threat than South Korea.”

Foreign Minister Yun Byung-se hosted the welcome dinner yesterday in attendance by some 350 people including delegations from China, Japan, Singapore and the United States.