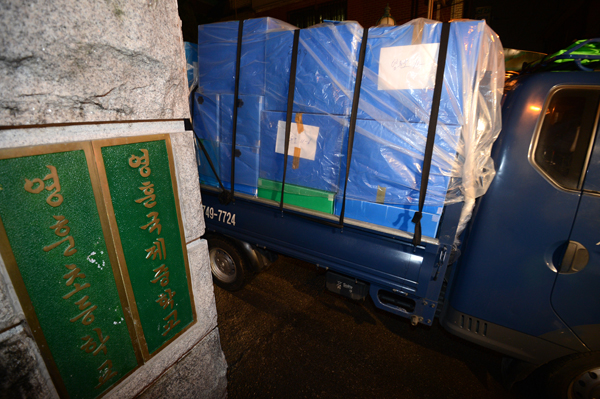 A truck loaded with seized materials leaves the Younghoon International School in northern Seoul after the prosecution on Tuesday raided the office of the prestigious school on suspicion it tampered with the results of admissions tests. [NEWSIS]

The prosecution raided Younghoon International Middle School Tuesday on suspicion that the elite private institution tampered with the results of this year’s admissions test in an attempt to offer preferential treatment to some applicants.

The Seoul Northern District Public Prosecutors’ Office said that it secured documents, computer files and other records which support the admission fraud allegation.

“It took longer than usual because so many documents were seized. The members of the digital forensic team are now working on processing the computer files,” a prosecutor was quoted as saying by the Yonhap News Agency.

The search-and-seizure operation came after the Seoul Metropolitan Office of Education’s investigation team announced the alleged attempt on May 20. The education office lodged a complaint against 11 school staff members with the prosecution and ordered the school to impose disciplinary action against the 10 personnel and withdraw the current executive board members.

The legal authority also plans to look into whether there were any backdoor dealings between parents and school administrators in question. The prosecutors reportedly obtained testimony that the school demanded 20 million won ($17,680) from parents in exchange for accepting an applicant. The test tampering was led by three key school officials who purposely inflated or deflated applicants’ scores on the subjective section that includes essays and references from teachers.

The three figures held the post of vice principal, teaching director and admissions director. They allegedly altered the scores of six applicants who ranked between 525 and 620 after the first objective section.

All of the six students somehow earned full marks in the second stage and subsequently ranked within the top 400 among all applicants, a safe range for admission to secondary school. Three of the six students were accepted to secondary school this year. A city council member’s statement yesterday that the son of Samsung Group’s vice president, Lee Jae-yong, appears to have received preferential treatment has further induced controversy.

“A school administrator of the Younghoon International High School said Lee’s son is one of those who received preferential treatment,” said Kim Hyung-tae, a council member of the Seoul Metropolitan Council who is member of an education committee.

The school’s admissions process came under tight scrutiny when Lee’s son was accepted this year under a special category for those with disadvantaged backgrounds.

The school said the son’s status as children of divorced parents qualifies him for the spot. In 2009, Lee and Lim Se-ryeong, managing director of Daesang Group, were divorced. Back in January, Samsung Group also said there are no wrongdoings or illegal measures to have the young son attend the prestigious school.

The education office said that it is premature to tell Lee’s son was not properly evaluated. “For now, we can neither deny nor confirm the allegation,” said Cho Seung-hyun, the education office’s inspector who led the investigation.