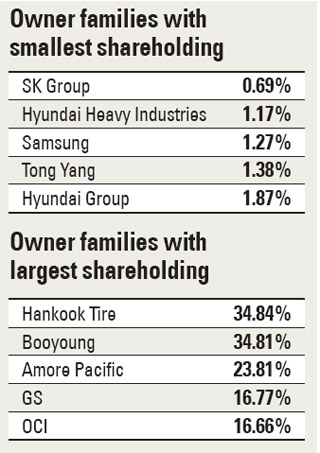 Owners of the nation’s conglomerates have been increasing their shares in subsidiaries of their groups through cross-shareholding, Fair Trade Commission said yesterday.

Cross-shareholding is considered contrary to the Park Geun-hye government’s “economic democratization” initiative as it allows owners to tighten control of entire groups by holding a small amount of shares, which can lead to less transparency in finance, embezzlement, breach of trust and poor management.

Percentages of stakeholding among subsidiaries and new cross-investments were made at five groups, the FTC said.

Some had to make cross-investments due to mergers or organizational restructuring. But most companies used the method to enhance power of a particular subsidiary or to avoid regulations, according to the FTC.

“The bigger the company is, the more control the owner has by holding a small amount of shares, and this practice hasn’t changed yet,” the FTC said in a report.

The 43 conglomerates with owners in control had more complicated cross-shareholding structures than companies run by outside CEOs.

On average, the 43 groups make cross-investments involving more than four subsidiaries, while companies like Posco and KT, run by professional CEOs, have a simpler structure involving one or two subsidiaries, the FTC data showed.

For Samsung, the pivotal units of the cross-shareholding structure were its financial units like Samsung Card and Samsung Life Insurance.

“The cross-shareholding has been an unavoidable structure in our economy [which attained a rapid growth based on leadership of a few conglomerate owners], but now owners have to take responsibility,” said FTC Chairman Noh Dae-lae.

One positive fact the agency found is the percentage of shares held by owner families and relatives has slightly declined.

According to FTC data, family members of 43 conglomerates with founders at the helm hold about 55 percent stakes in subsidiaries to take personal interests, slightly down from 56 percent last year.

On the other hand, Hankook Tire’s founding family turned out to be controlling the company with about a 35 percent stake, the largest portion in the country.

“There has been no specific law that can impose penalties on groups that allow owner families to take interests through cross-shareholding,” said Han Cheol-soo, secretary general at the FTC.

However, banning the controversial cross-shareholding practice could cause GDP to slide 2 percent, according to Korea University Prof. Oh Jung-geun.