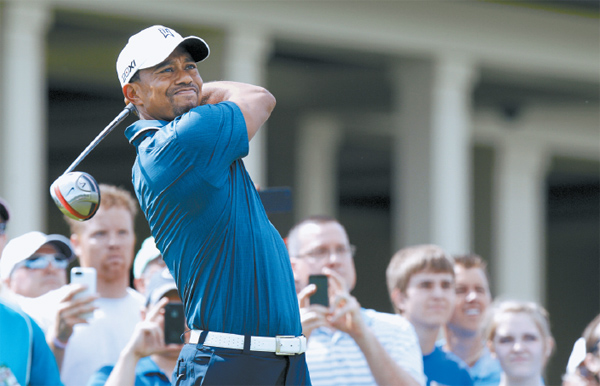 Tiger Woods hits a tee shot during the pro-am of the Memorial Tournament Wednesday in Dublin, Ohio. [AP/NEWSIS]

DUBLIN, Ohio - In the eyes of many, Tiger Woods and Jack Nicklaus are inextricably linked as the greatest players of all time, and it is probably no surprise that Woods has made a habit of flourishing on Nicklaus-designed courses.

This week, Woods is back in the leafy surrounds of Muirfield Village Golf Club for the Memorial Tournament, where he is a five-time winner and defending champion at the elite PGA Tour event hosted by Nicklaus.

“I’ve won on quite a few, whether it was in junior golf, college and now professional golf. For some reason, I just feel comfortable in his golf courses, the way he sets it up. There is ample room off the tees. The greens are really severe. If you miss the greens, it tests your short game. Those are the things that I think I do well.”

Asked if he gained any insight into Nicklaus the player when he competed on Nicklaus-designed layouts, Woods said: “Jack always was one of the best course managers that’s ever lived ? how he managed not just the emotions, but the golf course and the strategy behind how he played it.

“He gives you options and shots to shape to play his courses. If you don’t hit the ball in the right spot, you can get penalized. He played very disciplined and at times he was very aggressive, but those were at the right times.

“And he gives you opportunities to do that, the way he designs golf courses, you can be aggressive but you have to be disciplined and put the ball in certain spots.”

To say that Woods will tee off in Thursday’s opening round in a confident mood would be a massive understatement, the 14-time major winner having triumphed four times in just seven starts on the 2013 PGA Tour.

“I’m looking forward to it,” said Woods, who hasn’t competed since clinching his 78th victory in his 300th career start on the U.S. circuit at the Players Championship three weeks ago.

“I played really well the last tournament at the Players. It’s been a nice two weeks off but now it’s time to get out and play, and come to an event that I’ve always loved playing.

“I got a chance to come here as an amateur and watch a little bit. To have Jack be a part of this event with what he has done for the game of golf and to come here and support him has been fantastic for me and lot of the players.”