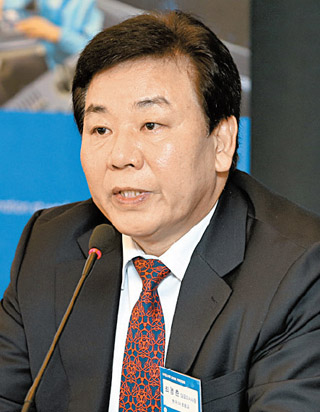 The new R&D center will be at a six-floor, 5,600-square-meter (60,278-square-foot) structure, and it is scheduled to be completed by February next year.

The company yesterday held a groundbreaking ceremony for the center located in Seongnam, Gyeonggi.

GE Ultrasound Korea said the expansion is expected to double the production of ultrasound devices and speed up the development of innovative technologies by creating a better working environment for R&D by 2017.

GE Ultrasound Korea is already GE’s largest R&D and manufacturing facility for ultrasound technology. Over 95 percent of devices produced in Korea are exported to 160 countries worldwide, including advanced markets such as Europe and the U.S.

“GE decided to make this investment as it sees Korea as a strategic growth base for Asia-Pacific and global markets,” Akihiko Kumagai, the President and CEO of GE Healthcare Asia-Pacific said in a press conference at Plaza Hotel in Sogong-dong, central Seoul.

“GE sees great potential in the Korean healthcare market due to its advanced medical infrastructure, including world-class medical professionals and institutions, ability to quickly adopt innovative technologies and the government’s focus on nourishing the healthcare industry. Through this investment, GE Healthcare hopes to become a committed long-term partner that contributes to the development of Korea’s healthcare industry.”

GE Ultrasound Korea, which has been growing 30 percent every year since 2009, makes up one-third of GE Healthcare’s ultrasound devices. It is regarded as a key manufacturing base for the leading healthcare company in the United States.

It specializes in producing ultrasound devices for general imaging and women’s health products.

Choi Young-chun, general Manager of GE Ultrasound Korea, who played a pivotal role in securing the investment, said the expansion of the R&D center is significant in that it is a fruit of 30 years of win-win partnerships with local suppliers.

“GE Ultrasound Korea will contribute to the Korean government’s initiative to actualize a creative economy and the development of the Korean healthcare industry by creating jobs, nourishing R&D talent and continuing its partnerships for shared growth with over 120 local suppliers,” Choi said.