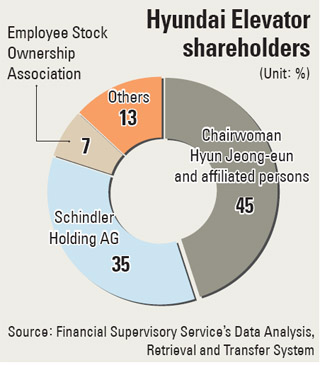 The dispute between Hyundai Group and Schindler Holding AG over Hyundai Elevator has intensified with the Switzerland-based company’s opposition to a 110 billion won ($100 million) capital increase with consideration scheduled next month.

On Tuesday, Hyundai Group plans to offer a 25 percent discount on newly issued stocks, which would not benefit current stockholders.

Hyundai Group claims the discount is legal and the decision to increase capital through a public offering is a proper business strategy. The elevator manufacturer has said the fresh funds will be used to build a manufacturing plant in Brazil and repair facilities in China.

Industry insiders said that despite Schindler’s opposition, the plan is likely to be approved because Hyundai Group Chairwoman Hyun Jeong-eun controls 45 percent of shares, while the company’s employee stock ownership association holds 7 percent.

Hyundai and Schindler have long had an uncomfortable relationship.

Hyundai claims Schindler’s recent actions are an indication it wants to acquire Hyundai Elevator. Schindler, the world’s second-largest escalator and elevator manufacturer founded in 1874, has expanded its stake at Hyundai Elevator steadily since 2006 when it bought more than 25 percent of company shares from KCC.

Schindler has emphasized it has no intention to acquire Hyundai Elevator, but to check whether the company’s business is on the right track.

In particular, the Swiss company apparently didn’t like Hyundai Group using Hyundai Elevator as a tool to control Hyundai Merchant Marine (HMM) instead of upgrading company’s profits and competitiveness.

Hyundai Group affiliates, including Hyundai Elevator, hold only a 27.7 percent stake in HMM, but Hyundai Heavy Industries (HHI) Group has recently inched up to 23.7 percent stake to threaten the ownership.

To protect its management from HHI, Hyundai Group has been signing derivative deals with its investors reportedly promising annual returns of 6 percent to 7 percent paid by Hyundai Elevator, in return for their support. Counting HMM shares from these investors, Hyundai’s voting bloc can go up to 42.4 percent.

However, this deal apparently enraged Schindler because under the derivative contract Hyundai Elevator must compensate financial companies if their HMM stock is worth less than when they bought it. According to a regulatory filing earlier this month, Hyundai Elevator reported a 195.3 billion won loss from stock derivatives in the first quarter.