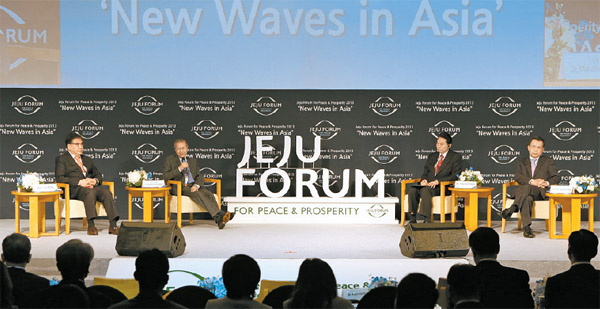 JEJU - Global leaders emphasized the importance of cooperation in Asia to contain regional tension - and threats from North Korea - as the eighth Jeju Forum for Peace and Prosperity kicked off yesterday on Jeju Island.

“It has been predicted that Asia, which has led world economic growth since the global financial crisis, will surpass North America and Europe by around 2030,” said Korean Prime Minister Chung Hong-won, a keynote speaker during the opening ceremony held at the Haevichi Hotel & Resort in southern Jeju.

In light of growing historical, territorial and maritime issues, Chung said, “The countries of Northeast Asia should build trust through dialogue and cooperation on common challenges such as environmental issues, disaster relief, nuclear safety and counter-terrorism.”

Chung added that the South Korean government is cooperating closely with the international community, especially Washington and Beijing, and will establish a multilateral dialogue process to deal with the North’s provocations and threats, adding, “The North’s ambition for nuclear weapons can never be tolerated.”

The Park Geun-hye administration’s policies promoting a “trust-building process” on the Korean Peninsula and the Northeast Asia peace and cooperation initiative, along cultural exchanges can “transcend any kind of ethnic, language or ideological barriers,” said Chung.

Political, business, cultural and academic leaders attended the forum, hosted by the Jeju Special Self-Governing Province, along with the International Peace Foundation, East Asia Foundation, the JoongAng Ilbo and the Jeju Peace Institute.

In keeping with the theme “New Waves in Asia,” the other two keynote speakers, former Japanese prime minister Yukio Hatoyama and former Malaysian prime minister Mahathir Mohamad, also proposed visions of how to address issues of tension in Northeast Asia.

Hatoyama served as prime minister between 2009 and 2010 as head of the Democratic Party of Japan. He stepped down from politics this year and established the East Asian Community Institute to push for “fraternity” in the region especially between Japan, China, South Korea, Russia and Taiwan.

“Especially since the start of Prime Minister Shinzo Abe’s government, politicians from the ruling coalition have more frequently engaged in words and actions that will only provoke neighboring countries,” said Hatoyama.

This includes “worshipping en masse at Yasukuni Shrine,” which enshrines war criminals, and publicly stating an intention to revise the 1995 Murayama statement apologizing for colonial and wartime misdeeds, and the Kono Statement on the so-called comfort women issue, or women recruited as sex slaves by the Japanese military.

“I recently visited Nanking and I know that politicians must not close their eyes to history,” he said, referring to a visit to a Nanjing Massacre memorial dedicated to victims of the mass killings in 1937 by the Japanese army.

Mahathir, who was the longest serving Malaysian prime minister serving from 1981 to 2003, had a poignant central message: That war should be made “a crime against humanity.”

He added that Malaysia has settled territorial disputes with the Philippines, Singapore and Indonesia through negotiation, arbitration and heading to world courts and complied with the results whether it liked them or not.

In the world leader’s session later, Mahathir added that the press and political leaders have a responsibility to constrain war sentiments, and said, “The leader from Japan who talked so much about sex slaves [Osaka Mayor Toru Hashimoto] was not contributing to a good relationship between Korean and Japan.”

Today, the forum focuses on economic issues, starting off with a special session with American investor Jim Rogers.