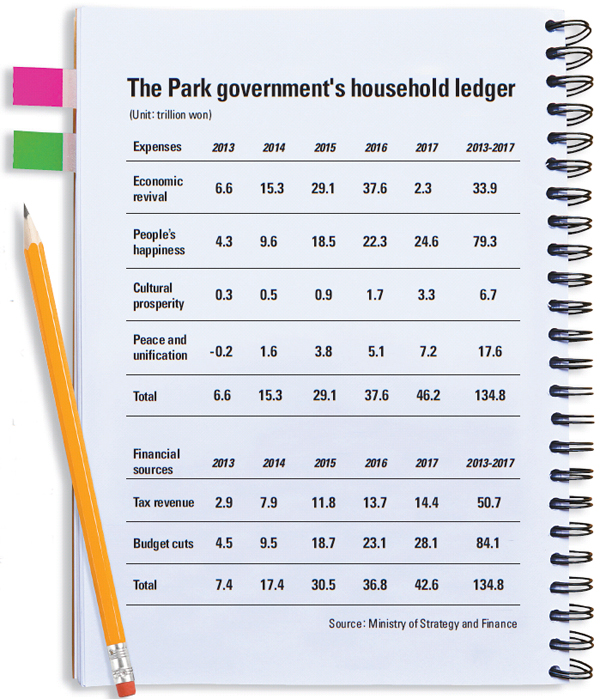 In a bid to encourage transparency, the government has picked up on Park Geun-hye’s idea of a household “account book” and for the first time is getting specific about how the president intends to keep her campaign promises to improve welfare and happiness over the next five years.

The “account book” plan released by the Ministry of Strategy and Finance yesterday estimates a budget of 134.8 trillion won for the next five years in five categories: economic revival, welfare plans, cultural prosperity and unification preparation.

The largest share - 79.3 trillion won - will be spent on welfare.

Among various welfare plans, the government is mainly focusing on retirement and expanding free child care and education.

Eligible senior citizens will receive a maximum of 200,000 won a month. The primary source of money will be the government’s 17 trillion won “People’s Happiness Fund.”

In order to create 50,000 jobs for the elderly each year, the government will spend 1.3 trillion won.

For all children under age 5, the government will provide a total of 5.3 trillion won in child care aid.

To help boost the country’s low fertility rate, the government will offer tax incentives for third-born children. This is expected to cost the government 5.3 trillion won. How much each household will get hasn’t been determined. The third child of every household also will receive a full tuition for college.

The government also unveiled how it will pay for the plan. It says 50.7 trillion won will come from tax revenue over the five years and 84.1 trillion won from adjustments. The Finance Ministry plans to get 36 percent of total spending from national taxes.

“The key to the plan is to let people know the government is not going to raise tax rates to finance this,” said Vice Finance Minister Lee Suk-joon at a briefing.

The ministry has set a firm rule not to extend a series of tax exemption benefits scheduled to end this year. There is one exception: tax exemptions or reductions to support small businesses, which can be discussed.

The government also will try to form a public consensus on tax evasion by top earners and conglomerates, and seek to legalize the shadow economy to discover hidden sources taxation. As a result, government’s scrutiny on taxpayers will be tightened further.

The Finance Ministry also will make an all-out effort to reduce the national budget by reining in discretionary spending starting next year.

A major target will be the social overhead capital (SOC) expenditure. The Park government had planned to allot 25 trillion won for SOC in its supplementary budget in April. There will be no reduction in that amount this year, but next year the government will start cutting back.