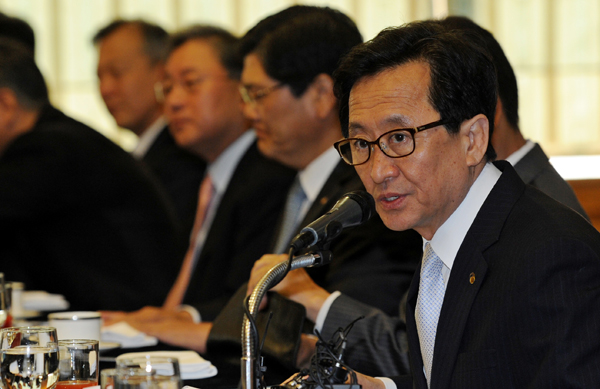 According to the Financial Supervisory Service yesterday, the regulator will make an adjustment to its management evaluation system for insurance companies so it’s easier for them to receive higher grades based on their liquidity ratio, a measurement of a company’s ability to pay back short-term debt.

The higher the ratio, the better equipped they are to pay back short-term liabilities out of total assets they hold.

Currently, to receive the highest grading by the FSS, an insurance company’s liquidity ratio should be higher than 400 percent.

The FSS will lower the highest grading level to above 250 percent. A high grading as a result of high ratio would allow insurance companies to receive loans from creditors.

The adjustment in the grading system is the first in 13 years.

“The change will be made to the extent that it doesn’t harm the financial soundness of insurance companies,” said an FSS official.

Yesterday, FSS Gov. Choi Soo-hyun met with heads of insurance companies and informed them about the changes.

He also told insurance chiefs that the FSS will support measures for them to diversify their profit-making sources by allowing them to expand purchases of foreign currency bonds and make alternative investments in other businesses like energy.

Choi said the financial regulator will give more autonomy to insurance companies in developing insurance products that meet current trends.

For example, the governor mentioned an insurance product for foreigners coming to Korea to receive medical treatments and also damage insurance for traditional markets.

“It’s necessary for insurance companies to maintain financial soundness so they are able to absorb losses that can happen in the future considering the low interest rate trend and the downward economic risks,” Choi told the insurance company chiefs yesterday at a meeting at the Korea Federation of Banks building in Myeong-dong, central Seoul.

“Insurance companies should make sure they have sufficient capital by expanding internal reserves and shares.”