Luxury strollers a load of cachet

Luxury strollers a load of cachet 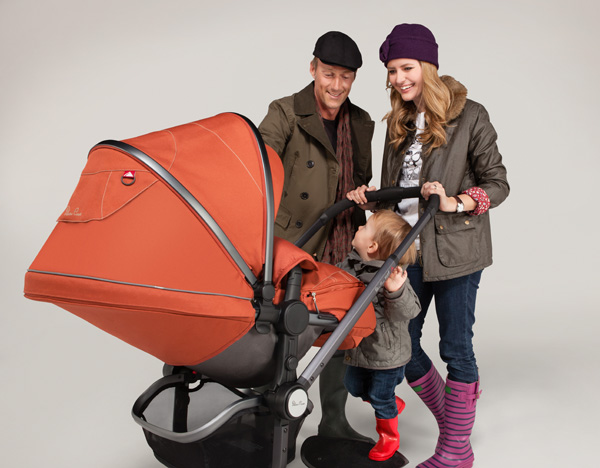 Silver Cross strollers retail for as much as 5,834 dollar. Provided by the company

As luxury strollers continue to draw the attention of mothers, imported “celebrity strollers” priced at millions of won are gaining popularity. And local companies also are getting into the act by releasing a series of fashionable and advanced strollers.

According to the Korea Customs Service, imports of strollers rose 10.8 percent last year from a year earlier, despite the economic slowdown and sluggish consumer spending after jumping 35.8 percent in 2011.

Child care products are becoming more advanced and upscale, and luxury strollers have led the way, in part because they are visible and easily compared. They have become designer fashion accessories and status symbols for well-to-do young parents.

Bugaboo baby strollers from the Netherlands were designed in collaboration with Marc Jacobs and are the choice of the Dutchess of Cambridge Kate Middleton, and the Norwegian Stokke has become so ubiquitous it is known as “Korea’s national stroller.” Buying one of these will set new parents back 1.3 million won to 1.7 million won.

However, shelling out that kind of money apparently is no guarantee of quality. Consumers Korea released the results of a test of 11 strollers from England, Hong Kong, the Netherlands, Sweden and Denmark by the International Consumer Research and Testing, an independent international organization based in London.

The organization evaluated safety, durability, mobility, ease of operation and seat-back reclining. Stokke Xplory Baby Stroller priced 1.69 million won and Orbit G2 at 1.45 million won were rated as fourth grade, the lowest ranking. Testers found the seat of the Stokke Xplory difficult to clean and noted that the gear rack was rated for a maximum load of measly 2 kilograms (4.4 pounds). On an unpaved road, the Xpory rattled excessively and was difficult to steer, and unwieldy to carry up and down stairs.

While no strollers tested were given the highest grade, Maclaren’s XLR (765,000 won) and Inglesina Trip (368,000 won) were rated as grade two. The two less expensive imports were evaluated highly in terms of seat adjustment, ease of transport and mobility.

“Just because something is expensive doesn’t necessarily mean the quality is superior. Rather than blindly preferring expensive foreign products, consumers should select strollers only after considering the child’s age, body size, living environment, weight of the stroller and how it will be used,” said a Consumers Korea official.

Locally produced strollers are an option well worth considering.

“I thought only expensive foreign strollers are fashionable and high quality, but the Ryan Spin LX is so popular among mothers that I decided to purchase it,” said a 34-year-old housewife surnamed Lee said. “I am very satisfied with the design and functionality.”