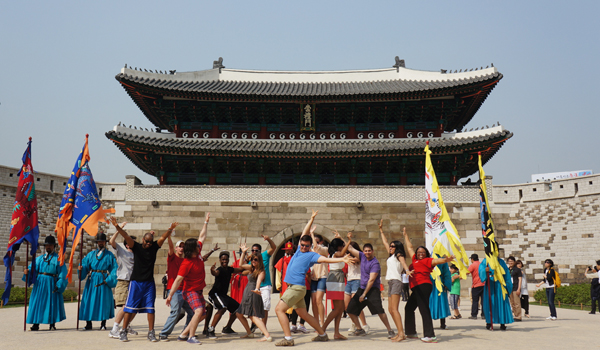 Matt Harding is known for his unusual behavior at famous landmarks. Instead of snapping photos, he often breaks into spontaneous dance, making him famous around the globe.

His video series “Where the Hell is Matt?” was filmed in more than 100 countries, including North Korea, and has attracted 80 million views on YouTube.

It has also garnered attention from paid advertisers, who hope to use Harding’s fame to their advantage in promoting products.

The famed dancer returned to Korea on May 25 to shoot a clip in front of Sungnyemun, National Treasure No. 1 that recently reopened after burning down five years ago. 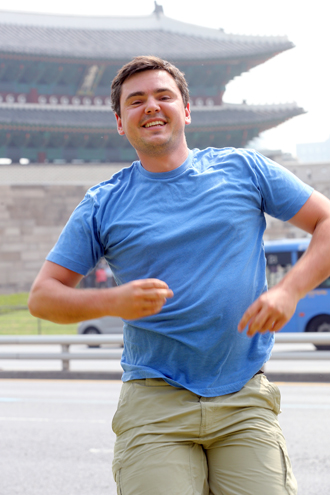 “Many people wrote to me about the fire because it was only two weeks before it burned down that we danced there [last], so I’m really happy to see it’s been rebuilt,” he said in an interview with the JoongAng Ilbo.

Unlike his last project five years ago, when he danced with Koreans, he has come back to the country with an American tour group of 17 college students selected by the United States Tour Operators Association to promote international travel to Americans. He is set to tour 10 destinations, and Sungnyemun is just one of them. The promotional video will be unveiled in July.

In an interview after the filming, Harding revealed that traveling the world to dance was not his initial career goal. He said he never expected his video to be such a hit.

“After leaving my job as a video-game designer in Australia, I began traveling around the world in 2003. On the trip, my friend asked me to do my stupid dance on the street corner when we were taking pictures,” he explained.

And it turned out to be so funny that he kept recording it, later posting an edited version online in 2005 at the request of his sister.

After the video went viral, Harding was offered sponsorships from companies and continued traveling and making new videos. Since then, his video has evolved beyond a one-man show.

Harding attributed his clips’ popularity to the simplicity of dancing that can show how we are connected and from the same walk of life.

“Dance transcends the world. It is deeper than language. It is the very act of being human and understanding what it is to be human,” he said.

For many years, Harding just had fun traveling and making videos, but now he puts personal messages into the video.

“More than anything else, I want to show people we don’t need to be afraid of each other,” he said. “As a traveler, I always had a little bit of fear when I went to new places like, most recently, Iran, Syria and North Korea. But I learned they were much safer and friendlier than I expected. So the video is the way of showing the other side of what we are shown.”

The world traveler, who came to Korea from Finland, left for India after completing his project.