6 young defectors got to U.S., Seoul

6 young defectors got to U.S., Seoul 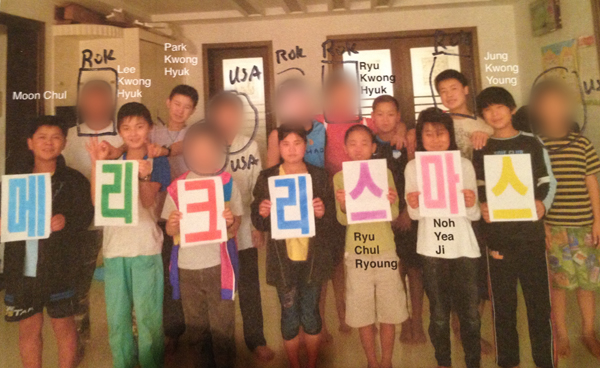 A photo released Thursday in Washington by human rights activist Suzanne Scholte shows a group of 15 young North Korean defectors on Christmas Day 2011 at a shelter in China, nine of whom were dragged home to Pyongyang this week. Earlier, three of the group safely fled to the U.S. and three made it to South Korea. Their faces are blurred for their safety. Provided by Suzanne Scholte

Denying Japanese reports, U.S. human rights activist Suzanne Scholte, who has helped orphans defect from North Korea, said that a group of nine young defectors that was deported from Laos to China and onto Pyongyang this week did not include the son of a Japanese abductee.

Scholte, president of the Washington-based Defense Forum Foundation and the North Korea Freedom Coalition, had been part of efforts to help that group of young North Koreans defect.

She said there were originally 15 in the group, mainly orphans fleeing starvation. In an interview with the JoongAng Ilbo, Scholte said the group originally numbered 15 and that three defectors managed to make it to South Korea last year and another three of the youngest, aged 12 to 16, arrived in the United States via Thailand last year.

This week, the remaining nine North Korean defectors, seven males and two females in their teens and early 20s, were stopped in Laos, held for several days and finally surrendered to North Korean agents, who flew them through China back to North Korea, where they may face harsh punishment. They were trying to get to South Korea with the help of a minister and his wife surnamed Joo. South Korea’s diplomats in Seoul and Laos appear to have been blindsided by the operation to surrender them to North Korea.

Japanese media previously reported that one of the defectors might be the son of a woman named by the Japanese government in 2006 as one of 17 people abducted by Pyongyang. It said she was abducted in the 1970s at the age of 29 and was known to have had a son in his mid-20s.

Scholte, who got involved with the 15 defectors starting in August 2011, said that was not true.

Scholte called the decision by the Laotian government to deport the nine defectors to be “very shocking” and expressed frustration at what she called “North Korean intervention.”

While she admitted it was disappointing the South Korean Embassy in Vientiane was not able to intervene to save the nine young defectors.

“However, the governments of China, Laos and North Korea, which enabled the repatriation of the defectors, are even worse,” she said.

The Wall Street Journal reported Thursday that Laotian Foreign Ministry officials said the North Korean refugees didn’t request to be sent to South Korea, and the South Korean Embassy there didn’t file an official request to visit them in detention.

The Joos, who were shepherding the defectors through China and Laos, said they contacted the South Korean Embassy in Vientiane when they were first detained on May 10.

“That afternoon [on May 10], our embassy informed our Foreign Ministry about the detaining of the defectors, and our government sent an official to convey the message that they could not be sent outside Laos’ borders.”

Afterwards, the Korean ambassador and other officials spoke with Laotian officials and emphasized that the defectors could not be deported, he added.

The United Nations also expressed concern about the case.

In a statement in Geneva on Thursday, chief of refugee rights, Antonio Guterres, expressed disappointment in the Laotian government and expressed concern over the safety of the deported defectors. The UN High Commissioner for Refugees said the agency was seeking information on the whereabouts of the nine.

“I am extremely disappointed that the Laos government appears to have abdicated its protection responsibilities in this way, and I urge the Chinese authorities not to do the same,” Guterres said.

Marzuki Darusman, UN special rapporteur on North Korea, in a separate statement in Geneva Thursday, said he has “real concerns about the penalties and treatment they could face if returned to DPRK [Democratic People’s Republic of Korea, or North Korea] and all the concerned authorities have an urgent responsibility to ensure their protection.”

Darusman, part of the three-member commission launched in March to investigate human rights in North Korea, was especially concerned that the defectors might face torture or even execution.