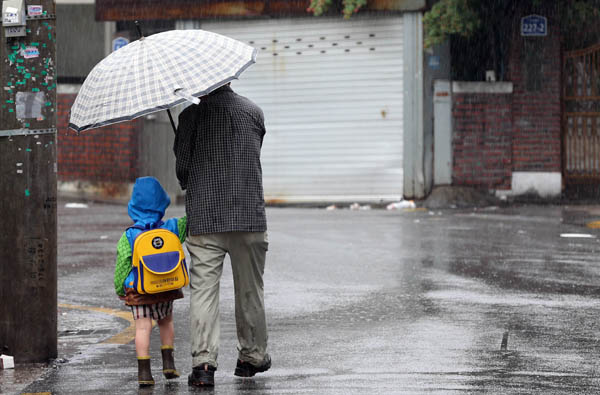 A grandfather takes his grandson home from a day care center in Gusan-dong, Eunpyeong District, northern Seoul. By Kang Jung-hyun

After leaving the workplace to have a child, a 31-year-old woman in Seongnam, Gyeonggi, decided to go back to work three months ago. What she needed most was a day care center to look after her 15-month-old daughter until she got off work in the evening.

Easier said than done. The frustrated mother got in touch with more than 30 day care centers and asked if they could take care of her daughter until 7:30 p.m. Almost all refused.

“I finally found one center that agreed to look after my daughter until 7:30 p.m.,” said the mother. “But if I am late for a few minutes because of traffic, I get calls from the center urging me to get there as soon as possible.”

“Because of my work, I needed someone to take care of my 22-month-old daughter for 11 hours a day, from 8 a.m. until 7 p.m.,” said Kwon. “Over 40 day care centers refused. I finally found one center in Seocho District [in southern Seoul] that agreed to take her.”

Take another case of a mother who applied for a place in a day care center for her 15-month-old child. She told the center she was a full-time housewife. The day care center responded positively in less than a month.

“Before I quit my job, I applied to the same place saying I was a working mom,” she recalls. “I did not get a call from the center for over a year.”

For all the stories about the expansions of day care for Korean families, these three stories show that finding a place for a toddler is still a challenge for working mothers - even though the law is on their side.

Under child care laws, day care centers are required to give priority to families with two working parents over families with only one. But their priorities are often the reverse.

A 52-year-old teacher in Dongdaemun District, central Seoul, told the JoongAng Ilbo that her center owner selected which kids to accept solely based on whether their mothers are employed. If they were, the kids weren’t accepted.

Among 30 working parents interviewed by the JoongAng Ilbo, 16 said a grandparent picks up the child or children from day care centers in the afternoon between 3 and 6 p.m. because the centers refuse to work any later. After work, the parents collect the kids from the grandparents’ houses. People who run day care centers have their side of the story.

“The state support budget for day care centers remain the same regardless of different hours of caring,” said one center owner in Songpa District, southern Seoul, speaking on the condition of anonymity.

“As the financial reward is the same [whether a mother picks up her child at 4 p.m. or 7:30 p.m.], it is inevitable for day care centers to prefer children with mothers working from home.”

Another center owner who runs a center in Jungnang District, central Seoul, said the government should step up its support measures for day care centers.

“The government support measures for day care centers do not differentiate different caring hours, thus making center owners reluctant to take children raised by working parents,” said Prof. Lee Bong-ju of social welfare studies at Seoul National University. “The authorities should take action to increase support for working parents even if it means shrinking the size of aid programs for families with mothers working in the home.”