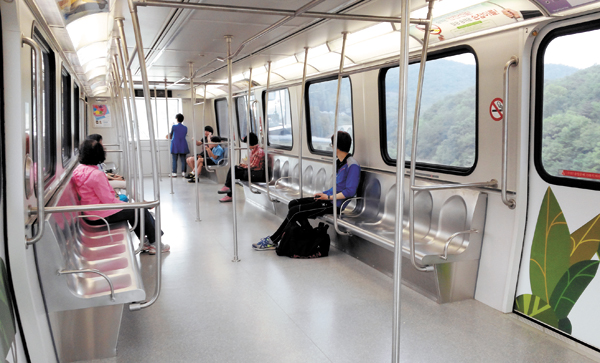 The Yongin light rail is almost empty on May 22. The number of passengers has been much lower than forecast. By Choi Mo-ran

It was about 6:30 p.m., when rush hour begins, at Giheung Station on the Yongin light rail, or Yongin EverLine, which began operating on April 26.

Despite the hour, it was quiet both on the platform and inside the train, which can hold up to 226 passengers. A family of four moved through the train taking pictures as it was their first time on the brand-new light rail.

It only took a few seconds to count the number of passengers - 12. Throughout the ride, the number didn’t change much as only three to five people got on or off at each station until the train arrived at its final destination, Everland Station.

“It has been like this since it opened,” said finance official Kim Kyu-ho, 44, at Myongji University’s Yongin campus, who commutes to work via the EverLine. 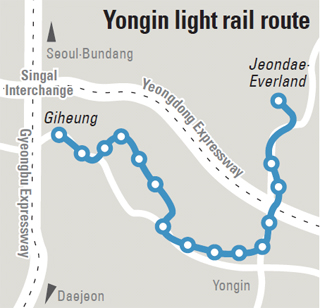 The EverLine started operating just over a month ago, but the nearly 1 trillion won ($889.8 million) line is sure to incur some hundreds of billions of won in debt every year as less than 30 percent of the people forecast to use the light rail are currently using it.

According to the Yongin city government, a total of 337,970 people used the light rail from April 26 to May 22, but this number decreases to 244,970 when about 93,000 free riders who participated in the free ticket event for the first two days of opening week aren’t counted.

The city government said that about an average of 9,421 people used the EverLine per day. Since the line operates a train 390 times from 5:30 a.m. to midnight, it means that only about 24 people filled each train.

The project of building the 18.1-kilometer (11.2-mile) line, connecting 15 stations from Giheung District and Everland amusement park in Yongin, Gyeonggi, was built based on a build-operate-transfer framework in which the government designated a private entity to design and build the infrastructure with its own finances and later recover the money it spent by operating the system.

If the operator of EverLine, the Yongin Rapid Transit Corporation, doesn’t make its target profit, the local government must cover the operator’s costs for the next 30 years, of course with taxpayers’ money.

According to the city government, it costs about 29.5 billion won per year to operate the light rail. If about 32,000 people use the line per day, the demand forecasted in 2011, the line incurs about 14.5 billion won in debt per year as it only generates about 15 billion won in revenue.

But if only about 9,400 people use the line, as happened in May, it will incur about 20 billion won in losses every year from only generating about 9.5 billion won in revenue. In this case, the city government would pay about 6 trillion won over the next 30 years to make up for the operator’s losses.

The light rail project started in 2005 to solve traffic congestion in the city as it has medium transport capacity between buses and subways and it also can be built at a relatively lower price than a subway line.

The project was initially suggested by the city government in December 1996 as the population in the area was constantly going up and many tourist sites, including the Everland amusement park and Korean Folk Village, began attracting a large number of tourists.

It took six years, from 2005 to 2010, to complete the line, but the company had been putting off beginning operations due to various problems, including the wrong demand forecast, which the city government said it recognized years after it started construction.

According to the audit report on the EverLine that the Korea JoongAng Daily obtained from the Board of Audit and Inspection (BAI), the city government didn’t carefully review the feasibility of the business and accepted the demand forecast report that the rapid transit corporation submitted, which expected that it would attract about 10,000 more passengers per day than the KTI forecasted.

The BAI had inspected a series of light rail development projects, including the Uijeongbu light rail line in northern Gyeonggi, which only attracts 14 percent of the forecasted number of passengers, and the line connecting Busan and Gimhae, South Gyeongsang, from Sept. 17 to Oct. 26 in 2012 with 35 inspection commissioners.

These light rail businesses have been consistently in debt and cause the local government that carried out the projects too much debt.

The report at the time stated that the light rail will mark 12.2 percent in modal share rate (percentage of travelers using a particular type of transportation) in Yongin, but the correct figure is only 1.5 percent, an exaggeration by about 10 times, the report said.

“The research institute predicted that the population in areas around the 15 stations will increase when the 15 residential development projects, including the No. 2 Gugal area in Giheung District, that have been carried out since 1997 by the local government are all completed by the end of 2010,” a spokesman of the BAI said.

“But only 69 percent of newly developed residential units are filled as of October 2012.”

EverLine’s terminal station, Giheung Station, where people can also transfer to the Bundang subway line, is in Gugal. The city government at the time projected it would build 3,399 residential units for about 13,000 residents between 1995 and 2000 in Gugal.

The report also stated that some advancements in other public transportation systems have influenced the EverLine: the transfer discount policy, which was introduced in 2007 and gives discounted fares to passengers making transfers on public transportation - intracity buses, express buses and subways - operating within metropolitan areas (Seoul, Gyeonggi and Incheon) and the introduction of bus-only lanes on the Gyeongbu Expressway (2008), a route that residents in Yongin and Seongnam, southern Gyeonggi, use to travel to Gangnam, southern Seoul, and other central Seoul regions including areas near Seoul Station and Gwanghwamun where many offices and public institutions are located.

It stated that the systems reduced the average travel time and the fare amounts, strengthening the competitiveness of public buses.

“Both the city government and the project operator didn’t reflect such changes to the project, though it was obvious that the EverLine wouldn’t have enough passengers,” Ji Mi-yeon, a member of the Yongin City Council, told the Korea JoongAng Daily.

The Korea JoongAng Daily made a little travel experiment in Gangnam, southern Seoul and Bundang, where a local subway connects to the EverLine.

The reporter first took a 5002 express bus from Gangnam Boulevard for 2,000 won with a T-money transportation card. The time of departure was 6:20 p.m. It took 47 minutes to arrive at Everland park.

The reporter went back to Gangnam from Everland by taking the EverLine and local subways. Total travel time was about 70 minutes, including transfer time, with a total fare of 3,350 won. It was about 30 minutes from the park to Giheung Station, where people can transfer to the Bundang line, with a 1,500 won fare. Because the EverLine isn’t included in the transfer discount system, another 1,100 won fee was required at Jeongja Station, after about 20 minutes more of travel time. At Jeongja Station, the reporter transferred to the Sinbundang Line after paying an additional 750 won to go to Gangnam, the final 16 minutes of the trip.

The result was quite similar when a similar experiment was conducted at Seohyeon Station in Bundang. It took about 27 minutes from the station using a 1500-2 express bus, which cost 2,000 won.

It took about 20 minutes to go from Seohyeon to Giheung Station with a 1,100 won fare and another 30 minutes from Giheung to Everland via the light rail with an additional charge of 1,500 won.

It was hard to find the benefit of using the light rail either from Seoul or from the local Bundang area.

“The demand forecast for the line was conducted before the Korea Transport Database was created,” an official with the KTI said.

The transport database was developed by the central government to give background information when leaders of public institutions, including local governments, plan projects or policies related to traffic, including road and railway construction.

“We were only able to settle on the figure by collecting economic indices like floating population and traffic volume of certain areas.”

But this isn’t the only action the Yongin city government has taken.

When the initial contract was made with Yongin Rapid Transit in July 2004, the city government agreed that it will buy 30 train cars for the EverLine and also agreed to purchase an additional five train cars in 2018. The cost that the city government has to pay to the private operator is about 29.6 billion won.

Between 2008 and 2011, the city government reconducted the demand forecast research with the Gyeonggi Research Institute and concluded that it will only have about 19 percent of the passengers that the KTI predicted.

The city government had a chance to cancel the project or ask for discounts in purchasing the additional five train cars as the two sides delayed opening day from 2010 to 2013.

During the audit period, the BAI recalculated the size of the train that was necessary to operate the EverLine, and concluded that they would only need 27 train cars even as late as 2041, when the demand is expected to reach its peak.

In October 2011, the International Court of Arbitration (ICA) ordered the city government to pay 515.9 billion won to Yongin Rapid Transit to take responsibility for the delay of the system. The company planned to start operating from July 2010 but was bogged down for almost three years because the city government demanded the resolution of safety and noise concerns.

The company filed suit in February 2011 with the ICA under the International Chamber of Commerce (ICC), a Paris-based dispute resolution tribunal, because one of the chief investors in the project is Canada’s Bombardier Advanced Rapid Transit. The ruling has legal force in Korea.

“A series of city government projects have been suspended due to the debts incurred from the EverLine,” said Seo, a member of the Yongin City Council. “The road construction project between Shingal and Suji, which has the highest traffic volume in the city, creating bicycle lanes, as well as projects for disabled people have all been suspended.”

The city government is currently considering filing a lawsuit against the KTI, which conducted the initial demand forecast.

“We are trying to find measures to revive the EverLine,” a spokesman of the city government said.

On May 28, the Gyeonggi Provincial Government proposed that the city government open a line from Giheung to Everland directly and launch discount offers for those passengers visiting the amusement park and the Korean Folk Village, but the city government said such a plan seems difficult to realize as it will also generate additional expenses.