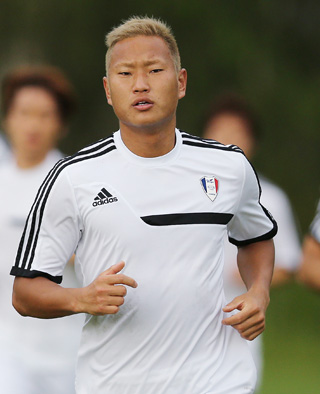 ong Tae-se saw his ranking slip from the leading position of the All-Star vote of the South Korean football league after the North Korean national team striker was embroiled in an ideological controversy for a remark that he made before coming to the South.

Jong was leading among the strikers in the K-League All-Star Vote that started on Thursday, before the Internet forum Ilbe, whose politically conservative views raised eyebrows of some over a variety of social issues, hurled a barb at the 29-year-old striker.

The online community took issue with a 2010 interview with an Australian media outlet in which Jong said, “I respect Kim Jong-il absolutely,” referring to the North Korean leader who died in December 2011.

“Does that make sense a ppalgaengi (a derogatory term for communists) that belongs to the North Korean national team plays in the All-Star game in South Korea? We should take action immediately to drag down his ranking,” one of the remarks posted on the Ilbe’s Web site said.

South Korea’s National Security Law provides a legal basis for punishing those in the South who make pro-North Korean remarks. The two Koreas are technically at war against each other as the 1950-53 Korean War ended not in a peace treaty, but in a cease-fire.

After the controversy arose, Jong expressed regret about it by posting a news article about it on his SNS site Thursday. Then, the Ilbe members responded by claiming that he should be kicked out of the K-League.

His All-Star vote took a dip, and as of yesterday, he was in third place after Lee Dong-gook of Jeonbuk Motors and Dejan Damjanovic of FC Seoul. Only two strikers will be voted into the All-Star Game.

Jong, who was born in Japan, has played for the North Korean national team since 2008. He joined the K-League early this year by signing with the Suwon Bluewings.

“The fact that Jong Tae-se played on the North Korean national team might be a provocative career to some,” a South Korean football commentator said. “But it does not make sense to have antipathy against Jong Tae-se, who was born and raised in Japan, just for that fact.”

Jong is a third-generation Jainich, or an ethnic Korean based in Japan. He was born with South Korean nationality, which he inherited from his grandfather, who was born in Euiseong, North Gyeongsang. But, he did not register as a foreigner.

Knowing the sensitivity, he has avoided mentioning his political views. He said in a South Korean media interview that he finds his identity in Janichi, not from either the South or the North Korea.

Some in the local football community are concerned that if Jong received any disadvantage, it could be seen in the international community as a political intervention in the South Korean football after Park Jong-woo’s case.

“As we can see in the happening of Dokdo ceremony by Park Jong-woo, the International Olympic Committee or the FIFA are against political conviction being involved in sports,” said a person in the local football community, speaking on the condition of anonymity.