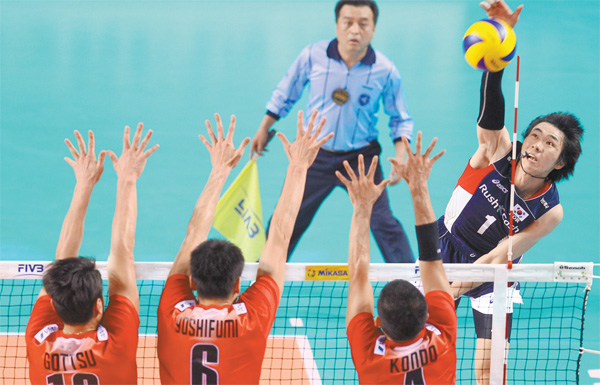 Jeon Kwang-in, right, spikes over Japanese players during the FIVB World League Intercontinental Round at Hwasung Indoor Gymnasium in Gyeonggi yesterday. Korea won, 3-1, yesterday and 3-1 on Saturday, extending its record against Japan in international volleyball matches to 68-47. [NEWSIS]

Korea got off to a strong start in a world volleyball tournament with its second-straight victory against its Asian archrival, Japan, in Hwaseong, Gyeonggi, yesterday.

Jeon filled the gap left by Moon Sung-in, Korea’s main attacker, who suffered a serious knee injury during the first game against Japan. Korea defeated Japan, 3-1 (25-22, 25-20, 21-25, 25-19) on Saturday. With the victories, Korea extended its record against Japan in international volleyball matches to 68-47.

Korea is seeking its first entry into the final of the FIVB World League since 1995. Korea finished sixth at the 1995 event, its best result.

Eighteen countries are vying at the latest World League.

Korea is in Pool C, composed of six countries ranked between 13th and 18th in the world. The other teams in the group are Japan, Finland, Canada, the Netherlands and Portugal.

Only the first-place team from the group will advance to the final round, where it will play against the top two teams from Pool A and Pool B.

Korea’s manager, Park Ki-won, however, expressed concern about carrying on the remaining campaign without his left-handed striker.

“We held a meeting that went on beyond 11 o’clock to address the vacuum left by Moon Sung-min, but we couldn’t find the solutions,” he said after yesterday’s victory. “Of the 22 national team members, only two, Ryu Yoon-sik and Seo Jae-deok, are lefties, but they are not in a condition to join us now.”

Korea will enter a two-game series against Finland this weekend in Suwon, Gyeonggi. Moon is likely to miss those games.