Do workers at public firms earn their fat paychecks?

Do workers at public firms earn their fat paychecks?

The top post at the state-run Korea Gas Corporation is vacant after its president and CEO Choo Kang-soo resigned earlier this month. When Choo first expressed his intention to step down in April, it was widely expected he would be one of the first chiefs of a public firm to be replaced under the new Park Geun-hye administration, considering he was close to former President Lee Myung-bak.

Knowing his time was almost up, Choo pushed aside any major decision over the past several months, leaving them for his successor.

But it has also prompted criticism that managers of the Korea Gas Corporation and other public firms may not be doing their jobs fully or effectively whenever changes in political power come about ? despite the fact that public sector managers get very high salaries to do just that.

Some say that many chief executives of public firms lapse into a “coma” state while they wait to be replaced.

“What important decision making would they be able to carry out while knowing that they will soon be gone?” asked an official from a public company. “Our chief executive has given up making decisions on important issues, which is disrupting the business in general.”

Further concerns are being raised that leaving top posts vacant adds even more travail to public companies, many of which are already suffering from high levels of debt. And although reducing their debt is an urgent task, some are only focused on who will become their new chiefs.

As of last year, debt held by public companies mounted to 493.4 trillion won ($437.4 billion), double the amount compared to five years ago. The volume is also higher than the 445.2 trillion won debt held by the central government in the same period.

“The Korea Electric Power Corporation and the Korea Railroad Corporation, for example, are in a situation where they have to take out loans to pay back interest on loans they previously took out,” said Park Jin, an official from the Korea Institute of Public Finance. “If they were private companies, they would be on the verge of bankruptcy.”

Park added that eventually, debt held by public companies will have to be covered by the government budget.

Despite the huge amount of debt, the annual starting salary at public firms increased by an average of more than 10 percent last year over the previous year.

According to an analysis of 30 public companies by Alio, a public service information site, the average starting salary last year was 30.58 million won, 10.2 percent higher than the previous year. Even in 2011, the average salary rose by 10.1 percent.

“Unlike private companies, public companies are guaranteed a monopolistic status,” said Hwang Kyu-dae, business management professor at SungKyunKwan University. “It is not only against the public’s sentiment but also against market principles that they are provided with high wages and benefits.”

Officials at the Ministry of Land, Infrastructure, and Transport shake their heads when the subject arises of a large public company under the ministry. Rumor has it that the president of the company will step down and employees practically stop working.

“High-level officials at the public company are not approving any documents and are only killing time,” said an official from the ministry. “It seems they are trying to be cautious in case of any inspection into the company after their chief resigns.”

In January, the government officially designated 295 companies as public companies, up 7 from the previous year. The number of appointments of chiefs and high-level executives controlled by the government is around 2,000, including those in the Korea Electric Power Corporation and the Korea Highway Corporation. These public companies manage major assets equivalent to those of large conglomerates. 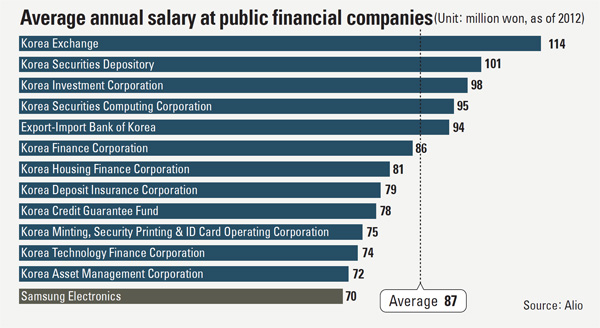 Total assets held by Kepco and its affiliates are 176 trillion won, while those of the Korea Land and Housing Corporation are 168 trillion won. Their assets are larger than those of Hyundai Motor (166 trillion won) and SK Group (140 trillion won).

Under law, when a new chairman of a public company is appointed, the minister in charge receives recommendations, picks one and informs the president for a final appointment.

Currently, around 10 public institutions are looking for new chairmen including the Incheon International Airport and the Korea Environment Corporation. At some public companies, guesses over which Saenuri Party person would be named were being made even before December’s presidential election.

“In the United Kingdom, an independent organization called the Office of the Commissioner for Public Appointments selects personnel [for public company chief posts] with expertise, leaving behind political considerations,” said Lee Jong-soo, public administration professor at Yonsei University. “It’s time for Korea to pick personnel based on objectivity rather than the authority of the new administration.”

Among public companies, positions in the finance sector are considered good destinations for job seekers, especially university students. They offer high annual salaries and stable working environments. There is also a criticism that they receive too many benefits.

According to an analysis by the JoongAng Ilbo, using data from Alio, the starting salary of 12 public companies under the Ministry of Strategy and Finance and the Financial Services Commission was 37.46 million won this year, up 25.7 percent from 2011’s 29.79 million won. Over the same period, salary increases at large private companies was only 7 percent.

According to the Board of Audit and Inspection, the Korea Securities Depository, for example, paid all of its employees’ telecommunications fees last year, spending 65,000 won to 85,000 won per employee per month. It also lent them laptop computers although employees were issued desktop computers. As for Korea Exchange, employees receive “welfare points” of up to 3 million won each every year.

“Young people today prefer to work at public companies because they tend to put their life’s focus not on social success but a comfortable life style,” said Lim Min-wook, an official from Saramin, a leading job portal. “Financial public companies in particular are popular among graduates of prestigious universities.”

According to a 2012 survey by Statistics Korea, 28.3 percent of young people between 15 and 24 prefer working at government institutions like ministries while 13.1 percent prefer public companies.

Analysts point out that the benefits given at public companies originate from the “parachute appointments” of their chief executives. The labor unions of public companies are usually not satisfied with the new chiefs appointed by the government, and they get back by negotiating with the management for higher salaries and benefits. And they succeed.

“When a new chief executive is appointed to a post, it’s often the case that the union of that company requests a wage hike on the condition that they won’t block the appointment,” said an official from the Financial Services Commission. “And these days, the unions often ask for more benefits than wage hikes.”

The Korea Coal Corporation has been in the red since 1989. The debt it holds was 1.47 trillion won as of last year, which is more than double its 677.2 billion won in assets.

In 2012, the corporation recorded a 100 billion won loss. It is in a vicious cycle in which it has to receive loans to pay back some 50 billion won in interest every year.

“We’re making a loss because the selling price of our products is lower than the manufacturing price,” said an official from the coal corporation.

But employees wages were reduced only once in 1998. In other years, their salaries go up. Last year, the corporation hiked its salaries by 10 percent, ignoring the government’s 5.5 percent guideline.

The Korea Electric Power Corporation has been in deficit from 2008 to 2012. Its losses over five years have grown to 10 trillion won and its debt surged from 26 trillion won to 95 trillion won over the same period.