Doubt creeps in over impact of Abenomics

Doubt creeps in over impact of Abenomics 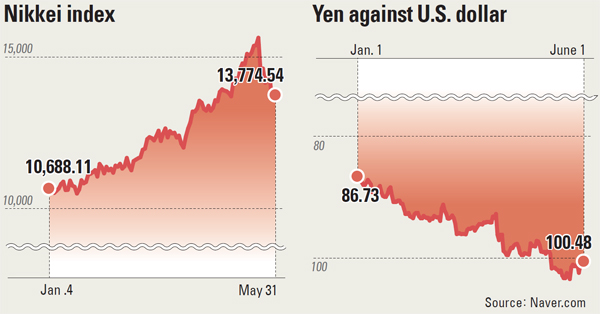 Doubts have been slowly growing in global markets, including in Korea, over “Abenomics” - a package of economic measures fashioned by Japanese Prime Minister Shinzo Abe since late last year to pull their economy out of a decade-long deflation malaise - as Tokyo’s equity markets have been declining after the spectacular rally they enjoyed over the last six or so months.

Even the weakened yen seemed to have a limited impact on Korea’s trade, according to a government report released Saturday.

In fact, Korea’s trade balance in May posted a $6 billion surplus, continuing an upbeat rally for the 16th-consecutive month that started February of last year.

Furthermore, not only was the surplus an improvement from April’s $2.4 billion, but it was also the largest in nearly three years. The surplus was largely the product of the 3.2 percent on-year increase in exports that reached $42.4 billion. Imports rose 4.8 percent to $42.3 billion.

Even with automobiles, which were considered the sector most likely to be hit the hardest by the Japanese yen devaluation, exports expanded 6 percent on-year.

The report is a relief for the Korean economy which was expecting a sharp drop as its price competitiveness is weakened in the global market against the backdrop of the falling yen value.

Many market experts projected that the impact of the yen devaluation would start to take its toll on the Korean economy in the second quarter.

The yen value tumbled more than 20 percent compared to the beginning of the year and fell as much as 103.61 against the greenback earlier.

However, even the yen depreciation is seeing a turnaround. On Friday, it appreciated to close at 100.84.

Additionally, Seoul’s main bourse has been enjoying a bullish rally as it climbed above the 2,000 mark on Thursday, which is the first time since March 29. This momentum continued on Friday as the market closed at 2,001.05, up 0.05 percent from the previous trade, ending the week with a four-day bull run.

The upswing in the benchmark Kospi was largely thanks to the buying spree of foreign investors.

On the contrary, the Japanese stock market, which has surged 30 percent since the beginning of the year thanks to Abenomics, has been suffering from growing insecurities.

The Japanese main stock market closed the week at 13,774.54, up 1.37 percent compared to Thursday. However, the slight increase in Friday’s market was largely due to investors buying back stocks that fell sharply on Thursday.

The market tumbled more than 5 percent on that day to a five-week low. This was the second-sharpest fall since May 23 when the Nikkei 225 spiraled down 7 percent, while its treasury bonds interest rate rose.

On Wednesday, the rate closed at 0.93 percent.

When the market fell 7 percent on May 23, the 10-year maturity bond rate surged to nearly 0.996 percent during the day, but eased later in the afternoon.

Since Kuroda Akira, the new governor of Bank of Japan, announced aggressive monetary easing to boost its economy on April 4, the interest rate on the 10-year treasury gained 48.7 basis points as of Friday.

“Market participants concerns over the sharp rise of the Japanese stock market and the growing volatility in such short period is one of the factors that triggered the bond interest to go up,” said Kim Yoon-kyung, economist at the Korea Center for International Finance.

Despite such changes popping up here and there the Japanese government has downplayed the situation.

Japan’s Finance Minister Akira Amari reportedly said on Thursday that excessive movements in the stock market could happen anytime and that there was no need to be perturbed.

Furthermore, Japan’s Abenomics will not likely be toned down anytime soon, as the International Monetary Fund (IMF) last week expressed its support of the Japanese stimulus program.

On Wednesday, David Lipton, managing director of the IMF, said at a press briefing in Beijing, “We don’t see evidence yet that Japanese policy has led to significant spillovers of capital outflows from Japan.”

Although Lipton was referring to China when he said Abenomics has affected the competitiveness of neighboring countries, he said he did support Abenomics as a process of pulling Japan out of a “20-odd years of deflation and low growth.”

But is Korea in the clear?

May’s trade figure says it may be, even though government officials acknowledge that the threat is still there.

“May’s export uptick was largely led by significant increase in IT products, particularly wireless mobile equipment from the U.S. and China,” said an official at the Ministry of Trade, Industry and Energy. “However, exports could shrink if the yen depreciation continues.”

The ministry official said even in May the weakened Japanese yen has not been fully implemented, as it seems that the Japanese companies have not yet readjusted their product prices to reflect the changes.

“If they lower the prices of their goods in the competing export market, the Korean outbound industry will likely feel the influence,” the ministry official said.

Many of the local think tanks, including Woori and Hana research centers, project the yen to weaken as much as 120 yen against the dollar by the end of the year, while further dropping to 130 next year. This poses a threat to Korea’s economy, which heavily relies on exports.

But as much as the depreciating Japanese currency is a major concern for Korea’s export-driven market, Abenomics failing is also a concern, namely for the massive impact it would have on the Korean market.

“The recent surge in interest is one sign that shows the limits of Abenomics,” Kim of the Korea Center for International Finance said. “If this volatility continues and widens it could spur a more negative perception of Abenomics.”

The Korean financial market fears the rising Treasury interest more than anything else. As earlier mentioned the 10-year maturity bond rate has already reached near 1 percent. This means that the Japanese government’s fiscal burden on top of a huge debt that is 200 percent of the nation’s GDP will be further burdened by rising interest rates.

The Japanese financial market, which now owns a massive amount of the Japanese Treasury, will face losses from falling values of its bonds. The Japanese central bank estimates that when the Treasury interest rises 1 percentage point, commercial banks see their capital shrink 10 percent while provincial banks have a capital loss of 20 percent.

The problem is when such financial instability grows Japanese investors will likely pull out their loans to Korea. This could spark another financial crisis in the local market.

“This could result in increasing the volatility of Korea’s own foreign exchange and financial market,” said a market expert.

But not all agree, and some say that such fear is exaggerated.

“The rising Treasury interest is an obvious result of the monetary easing,” said an analyst at Tong Yang Securities.

Others say just because the yen appreciated from 103 to 100, it’s too early to say that Abenomics was a failure.

However, one thing that market experts agree on is that Korea needs to change its economic structure and enhance the competitiveness of its domestic market, especially when Korea’s is now faced with low-growth.