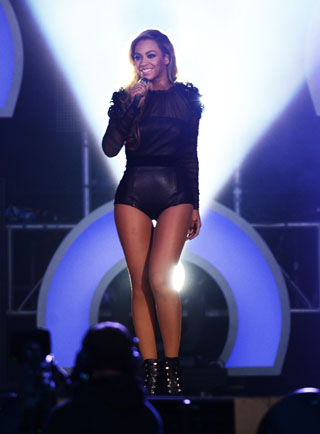 ONDON - U.S. singer Beyonce performed a set full of female anthems on Saturday at a London concert to raise funds for women’s health, education and justice.

The concert, which organizers hoped would reach a billion viewers, was staged by Chime For Change, a charity started by Italian fashion house Gucci, which crowdfunds donations for projects to advance gender equality in more than 70 countries.

The “If I Were A Boy” singer was joined on stage by husband and rapper Jay-Z for “Crazy in Love”, but sang stirring anthems of female empowerment for which she is best known alone.

She told the audience that the charity gig had already raised $4 million, and urged them to go online and do more during a set lasting 40 minutes that also included short films about women’s issues starring Beyonce.

Performances from Florence + The Machine, John Legend and Jennifer Lopez with a surprise duet with Mary J Blige, entertained the audience of more than 50,000 at Twickenham Stadium, west London.

Beyonce walked on stage wearing a black leather body suit with sequin shoulders as the crowds chanted her name, and an all-female troupe of violinists played the opening chords of “A Change Is Gonna Come.”

Tearful but smiling, she then sang “At Last”, originally by Etta James, and pleased a dancing crowd with an energetic performance of “Run The World (Girls)”.

The Song For Change concert was broadcast live to 150 countries, and on primetime TV in the United States the next day, organizers said.

Promoting gender equality and empowering women is one of the eight goals set out by the United Nations at the turn of the millennium, yet inequality remains with just 21 percent of seats in national parliaments held by women, according to the Chime For Change Web site.

Leading human rights activist and anti-apartheid campaigner Desmond Tutu appeared in a video message and called for men to stand up for girls and women.

“This is the time for a revolution for women and girls,” the 81-year-old said. “And we each must play a part. Empowering girls and women is the challenge of our time.”