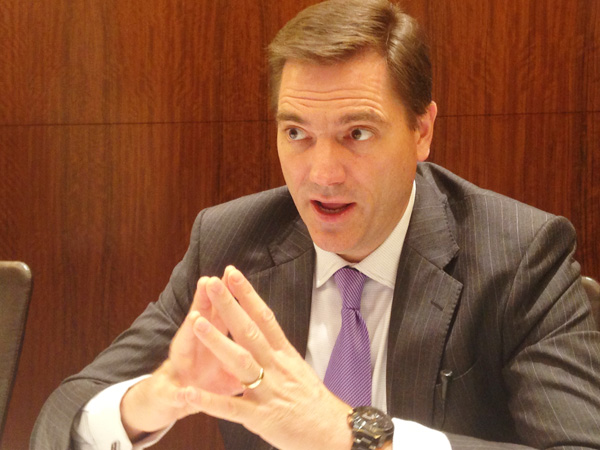 Jeffrey Singer, CEO at Dubai International Financial Center (DIFC), suggests that in order for Seoul to become a financial hub, it should focus on what Korea is already good at because “financial economy follows real economy.”

“Focus on your machinery, electronics, automobiles, things that are real,” Singer said in an interview with Korea JoongAng Daily. “To the extent that the real economy is strong, finance will follow. You want to make sure your very best people are going into companies that are creating jobs and sustainability.”

In regard to the Park Geun-hye administration’s “creative economy,” which aims to expand the share of added value created by the financial sector to 10 percent in the next 10 years, Singer said nurturing venture capital and private equity markets should be the priority.

“What the United States got out of [the Silicon Valley] period was the undisputed technology capital in the world,” he said. “If Korea would like to take the same route and have a strong technology sector, they need to allow it to be completely open. Allow all entrepreneurs to bring forth ideas, let risk happen. Let companies fail. Let companies succeed … That’s a process. Allow the craziness to happen. Make it easy for these companies to do an IPO.”

Singer was in Seoul to attend a forum last Monday. Prior to joining DIFC, he served as CEO of Nasdaq Dubai and senior vice president of Nasdaq OMX Group.

Q. How did Dubai become a global financial hub in such a short period of time?

A. For companies looking for a place for their Middle East headquarters, there isn’t a better location. Dubai has consistently demonstrated a commitment to trade. They consistently honor the rule of law, they consistently build and develop infrastructure to make it easy for companies to do business. For example, if you locate in Dubai and you want to do business in Africa, you can get to more places in Africa from Dubai than you can if you’re in Africa. Emirates Airlines was specifically designed to follow the trade routes.

Financial services firms need certainty and safety. DIFC has its own set of laws based on English common law. If you’re a bank, you are able to have certainty that if anything in a deal is done incorrectly or if anything goes wrong or if there is any type of lawsuit, that issue will be resolved in a DIFC court. If you’re outside the of DIFC, then you’re left a Syrian or Arab court system, which many western as well as eastern firms are unfamiliar with and they don’t want to take that risk.

How much has the Dubai economy recovered from the moratorium back in 2009?

The economy is improving. The excitement of Dubai is returning. One building, a 40-story multipurpose building, sold in one day. There was a lineup of people waiting three days to buy one of the units. There’s a feeling and a belief that property values are increasing and rents have stabilized.

Seoul aims to become Asia’s financial hub. What advice can you give to Korea?

Focus on your machinery, electronics, automobiles, things that are real. Finance supports the economy, not the other way around. You want to make sure your very best people are going into companies that are creating jobs and sustainability, that have real productivity. If they end up to going to finance, then you’ll lose real economy.

Second, keep your financial industry simple. Don’t get involved in complex transactions that are going in New York and London. Ultimately, those wind up in dangerous places.

Third, strengthen your capital market. Make sure your stock exchange is strong, make sure it’s liquid. The stock exchange takes people who have built companies and allows them sell the companies to a broad swath of the population. That is the most effective way to distribute wealth. If the capital markets are strong, and if the government and wealthy individuals are listing their companies on the market and if retail and markets are buying the shares from markets, the economy will be strengthened.

What advice can you offer for the Korean government’s creative economy in the finance sector?

Make it easy for these companies to do an IPO. I would recommend companies that IPO after getting venture capital not be sold. Why? If I sell my company to another firm, I take all value and I give it to one firm. If I take it to the public it goes to millions of people; you spread that wealth as well as that risk. The entire economy takes advantage of it. Allow the craziness to happen. When Korean entrepreneurs see how much money they can make from an IPO, they will keep rushing ahead with new ideas and technologies.

Private equity takes broken companies, fixes them and put them back in the market. That’s a good way to strengthen the economy.