Learning from the Saemaeul days

Learning from the Saemaeul days 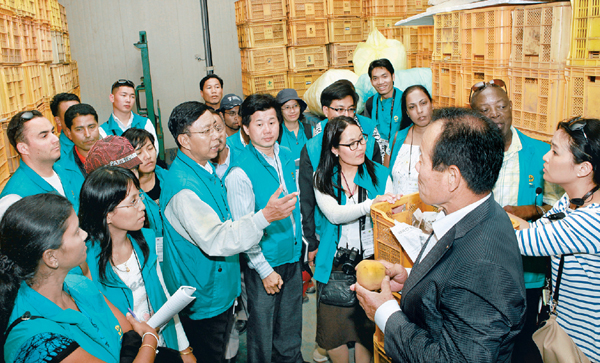 ANSEONG, Gyeonggi - In front of a pear tree in an orchard in Anseong City, Gyeonggi, a mixed group from such diverse countries as Kenya, Uganda and Nepal carefully listen to advice for growing pear trees and how best to manage them to boost profits.

All of them were paying such close attention that, other than the instructor speaking, there was complete silence. As soon as the instruction finished, a number of questions followed.

Here, 27 people from eight different developing nations were learning Korea’s growth model for the Saemaeul Movement, the major catalyst that transformed Korea from a war-ravaged state into an economic powerhouse during the 1970s under the Park Chung Hee regime.

“To have better, fresh pears we usually plant our trees sparsely,” explained Ham Ok-sang, head of the Saemaeul Movement Association based in Anseong.

“We also have an agricultural cooperative which collectively farms and packages the fruits to increase efficiency,” he said.

Organized by the Saemaeul Undong Central Training Institute, the farm instruction is part of a 10-day program that ran from May 20 through last Wednesday where visitors gain insights into the development model that was adopted in 1970.

The eight countries include Myanmar, Laos and Uganda, as well as Sri Lanka, Cambodia and Kyrgyzstan.

Recognized by the United Nations as one of the most efficient rural development models in the world, the growth initiative is widely embraced by countries like Vietnam, Myanmar, Mozambique and Uganda. A regional office is usually operated by Korean officials to help administer the plan.

The Economic Commission for Africa, or ECA, selected the Saemaeul Movement as a base model for the region’s rural transformation program in 2008.

The movement has so far been exported to more than 70 countries.

The state-run organization has invited different groups of people to share the knowledge of the development model for 10 years. The vast majority of them are village leaders and public servants.

“The training institute mostly brought in farmers from developing countries, but we figured that the leading members of the society also need to know about this growth model because they are the ones who will make decisions,” said Lee Dong-hyo, director of the global Saemaeul education division at the state-run institute.

Evah N. Kateregga from Uganda is one of the participants and a decision maker in her village.

“In my village, we already have a Saemaeul Movement division. And we now plan to embark on a pilot farming project with the skills acquired here and back in Uganda,” she said.

“I think Korea is a blessed country because it was able to lift itself out of poverty, and I think it will be more blessed because they try to help other countries fight poverty,” she said.

The entire expenses of teaching and accommodation for the participants are covered by the state-run body. The Saemaeul institute has organized between three and four such programs each year.

“I am most interested in group farming. In Uganda, most of us farm individually and the individual farmer sets their own products’ prices. I think this system is less efficient than group farming,” the African participant said.

Along with the village leaders, public officials in the education sector also expressed a great interest in the development program.

“In 2012, I learned about the Saemaeul Movement,” said Thein Tun, rector of Co-operative University as well as an official of the Co-operativeDepartment from the Ministry of Co-operatives in Myanmar.

“We are now in the process of choosing model villages to implement the farming technology of the movement,” he said.

He also said that Korea’s effort to share knowledge prompted him to seek more cooperation with Korea.

“Last year, we had an exchange program with Sungkyunkwan University at the Co-operative University.

I feel attached to the Korean university because I learned how Korea has developed,” the rector said.

Although many overseas workers and government officials are eager to learn the secret behind Korea’s rapid modernization and advancement, Lee Dong-hyo of the training institute acknowledges it’s still a daunting task.

“The essence of the Saemaeul movement lies in cooperation and team spirit,” Lee said.

“So, we are trying to show them this sense of community and fellowship and emphasize that one should sometimes sacrifice for the benefit of everyone. Some countries’ people are good at accepting the notion and others are not,” he said.

The director said people from Southeast Asia are more accustomed to the concept of community than those from Africa.

“Southeast Asians have an experience of harvesting rice so they are more familiar with farm cooperatives and team spirit,” Lee said.

“But those from African countries are less accustomed to the community spirit,” he added.

“But what all of the participants have in common is their passion to learn. We are usually behind schedule because there are lots and lots of questions and comments from them.”

Despite the growing interest about Korea’s main growth model, doubts have arisen whether the government can run such a well-meaning program efficiently.

More than eight different institutions currently carry out a program meant to disseminate the knowledge of the Saemaeul Movement.

Multiple state-run bodies, including the Ministry of Strategy and Finance, Export-Import Bank of Korea (Korea Exim Bank), the Ministry of Agriculture, Food and Rural Affairs and Rural Development Administration chip in for similar projects.

In Mozambique’s Manica Province, for example, the Korea Exim Bank runs an agriculture training center, but another government body is in the process of establishing a training center in the neighboring area. The inefficiency of the divided resources was pointed out in 2011 when a new experience-sharing program for the movement was discussed during a policy meeting under the chairmanship of then-Prime Minister Kim Hwang-sik.

“Many of the Saemaeul Movement programs are conducted in an inefficient, nonintegrated way,” the statement from the meeting read.