Behind the scenes at the world’s best airport

Behind the scenes at the world’s best airport 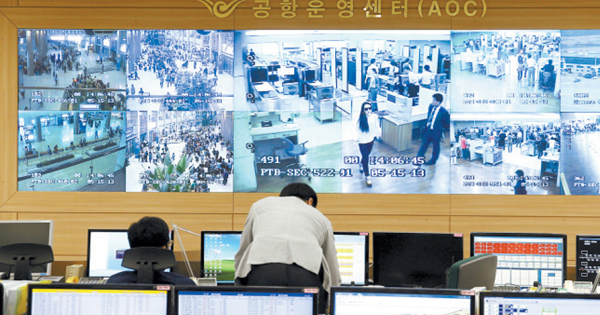 The security officers of the Airport Operation Center, or AOC, supervise various airport sites with monitors that show every corner of the Incheon International Airport by using 1,800 surveillance cameras. By Kang Jung-hyun

INCHEON - Since it opened, the Incheon International Airport has often taken the title of the world’s best airport. Many attribute the repeated honor to the airport’s commitment to ensuring passenger safety.

Dozens of security officers are tasked with watching 30 monitors that show every corner of the venue with 1,800 surveillance cameras installed in every nook and cranny inside and outside the airport. If an emergency happens, they head directly to the scene and take care of the problem.

The cameras are trained on 130 boarding gates and 1,180 platforms and other facilities.

A surveillance camera detected something unusual on May 15. Some 200 monks and followers of Buddhism were spotted attempting to hold a Buddhist ceremony in the terminal ahead of Buddha’s birthday on May 17. A security officer of the Terminal Counterterrorism Center reported the incident to the main security unit, the Airport Operation Center. The security team went to the site and settled the disturbance by persuading them to hold the ceremony in another location.

“If they caused a major inconvenience, we would dispatch a chief security officer,” said Kim Yoon-jin, team manager of the unit, adding that the airport is authorized to remove anyone causing a disturbance.

Most workers arrive much earlier than the designated hour. Ji Eun-young, who works at a ticketing office for Asiana Airlines, wakes up at 3:30 a.m. to arrive at the airport by 5:30 a.m. The ticket counter opens at 6:10 a.m. She gets off work at 3 p.m.

“The time between 7 and 9 a.m. is the busiest. But after peak hours, I can take a little rest,” she said.

In order to serve more than 300 million passengers annually, there are 35,000 workers in total, including ticketing officers and security guards.

A ticketing officer like Ji deals with at least 100 airport customers on a daily basis.

As they deal with a hoard of people, the workers hit bad patches from time to time.

“When I was a new recruit I couldn’t work as swiftly as I can now,” said Jeong Joo-ye, a 25-year-old woman who works for Asiana Airlines. “One passenger even swore at me. At the time, I couldn’t hold back my tears.”

Ji, the ticketing officer of Asiana, has had similar experiences.

“When I asked a passenger for her visa, she accused me of demanding too many things and threw her passport at me,” she said. “These types of incidents are not unusual, but we have to try to ease their anger.”

Kang Ji-yoon, who also works for Asiana Airlines, had a rather bizarre experience.

She issues tickets at a window exclusively reserved for those passengers traveling with infants under 24-months-old to offer them swifter service.

“A couple in their 30s stood in the line and the man said ‘here is my baby,’ with his finger pointing at the woman next to him,” said the 23-year-old.

The international airport is bustling with people around the clock. Even at midnight, people are crowded in the basement where a huge jjimjilbang, or public bathhouse, is equipped with heated floors for lounging and sleeping.

Most of the bathhouse users had purchased a ticket for a flight that departs early in the morning or are waiting for a delayed airplane.

“During the peak summer time, it’s even hard to walk because too many people visit,” said Cha Min-guk, manager of the underground facility Spa on Air in the airport.

If one doesn’t want a packed place, a bench is an option. A 35-year-old man from Bolivia felt safe resting on one. “Security officers constantly patrol around the clock,” he said.