Lee Chung-yong came up short of regaining his coveted mantle as a Premier Leaguer as his Bolton Wanderers must play another year in the second-tier Championship after their seventh-place finish last month.

So, Lee might as well take a chance to outshine other big-name Korean footballers when Korea faces Lebanon in a crucial World Cup qualifier early tomorrow morning in Korean time. He’s a top pick on Choi Kang-hee’s squad as the team seeks to demolish Beirut, which would be one step closer to securing Korea’s eighth World Cup berth. If that happens, Lee would become a national hero.

Instead, the 24-year-old midfielder said that he will be happy to create chances for others to shine.

“Of course, I will score if I get a chance,” Lee said yesterday in Korean time as the Korean national team trained at Beirut Municipal Stadium. “But, I think it’s a better for me to play an assisting role for other players to score.” 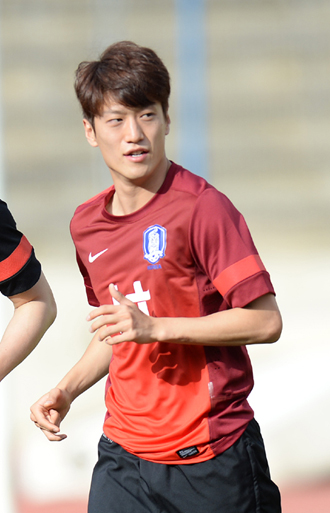 Korea is entering the final stretch in its campaign to play in the 2014 World Cup in Rio de Janeiro, Brazil. There are three remaining qualifiers and a loss to Lebanon would leave Korea to play the two final qualifiers with uncertainties.

The Lebanon match, the only away match left for Korea, will be held at 2:30 a.m. tomorrow Korean time at Camille Chamoun Sports City Stadium in Beirut.

Korea has many strikers; Bundesliga “Sonsation” Son Heung-min will mount a formidable threat on the front along with K-League stars Lee Dong-gook and Kim Shin-wook.

The 2012 Asian MVP, Lee Keun-ho, will also try to make the best of his strengths against the teams from the Middle East.

But, Choi’s squad lacks confidence in the midfield as Ki Sung-yueng of Swansea City serves a one-game ban due to cumulative fouls. Koo Ja-cheol of Augsburg was also left off the team due to an injury.

“Like Juan Mata, a backup striker with Chelsea, Korea needs a game-maker that could create a chance from both centers and wings,” Park Moon-sung, a SBS football commentator, said. “Lee Chung-yong, who had more assists than goals, is required to play a role.”

Choi shows deep trust in him.

“There are players that the manager put on the list first, without giving a second thought,” the coach said. “That is Lee Chung-yong.”

Lee missed out on the previous Lebanon match in November 2011, when Korea lost, 2-1. Lee said that he wants to be a part of Korea’s payback.

“All the players are united in trying to beat Lebanon,” he said. “I want to show the best play that I can show.”

In a training session, Choi put Lee in a back-up striker position along with Kim Bo-kyung of Cardiff City and Lee Keun-ho, with Lee Dong-gook out on the forefront. Son likely will substitute Lee in the second half.

Three-time World Cup member Kim Nam-il of Incheon United and Lee Myung-joo of the Pohang Steelers are expected to cover the defensive midfielders.

Korea, the runner-up in Group A, will host the group leader, Uzbekistan, on June 11. A week later, it will host Iran, which trails Korea by three points.

Only the two best teams in the group will directly qualify for the Rio de Janeiro World Cup,