[NEW ARRIVALS] Keep Your Eye on the Marshmallow

[NEW ARRIVALS] Keep Your Eye on the Marshmallow 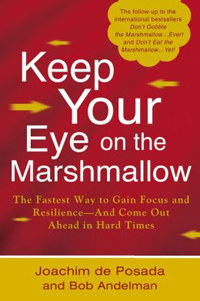 Gain Focus and Resilience And Come Out Ahead

The follow-up to the international bestsellers “Don’t Gobble the Marshmallow .?.?. Ever!” and “Don’t Eat the Marshmallow .?.?. Yet!” After facing many hardships and challenges, former chauffeur Arthur has come out on top, happily married and at the pinnacle of his career. But Arthur has always had a dream of starting his own business. In the face of a difficult economy and his own fears of success, Arthur begins to flounder in his new endeavor and forgets all of the principles his former boss, billionaire Jonathan Patient, taught him. Instead of delaying gratification, Arthur begins to eat his marshmallows again.

Based on the landmark Stanford University study, the marshmallow theory details the results of an experiment where children were left alone with a marshmallow and told that if they didn’t eat it they would receive an additional marshmallow in 15 minutes. Years later, researchers discovered that the children who had chosen to wait grew up to become more successful adults than the children who did not.