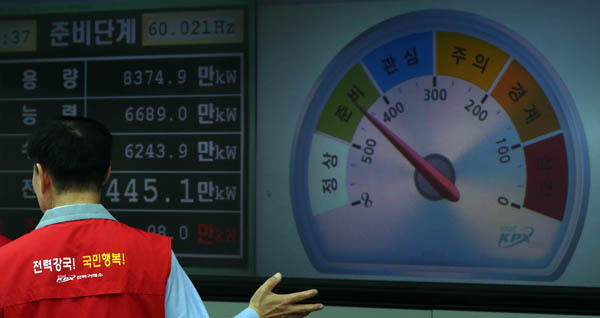 An employee with the Korea Power Exchange follows emergency protocol as the KPX issued a preliminary warning for a possible power shortage at 1:31 p.m. yesterday. The warning was withdrawn at 5:50 p.m. By Kang Jung-hyun

The government issued a preliminary warning for a possible power shortage yesterday afternoon, following a recent shutdown of nuclear reactors due to faulty parts and fabricated certificates last week.

The Korea Power Exchange, the state-run power distributor, issued the warning at 1:31 p.m. yesterday after the nation’s electricity reserve fell below 4.5 million kilowatts.

The warning was issued based on the distributor’s prediction that the power reserve could fall below 3.67 million kilowatts later in the day as demand was expected to hit its peak around 2 p.m.

It is the second time that the government issued the warning this summer. The warning was withdrawn at 5:50 p.m. 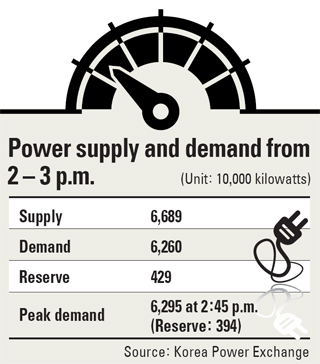 Yesterday’s warning signaled that it was only the beginning of a long road of difficulties, triggered by the shutdown of two operational nuclear reactors and delays in resumption of two new reactors due to last week’s scandal of faulty components with fabricated test certificates.

Each closed reactor is depriving the nation of 1 million kilowatts of power, which cuts the nation’s aggregate power generation capacity to 78.7 million kilowatts, while this summer’s peak demand for power is estimated by the Ministry of Trade, Industry and Energy to reach 79 million in the second week of August.

The Energy Ministry announced on Friday a set of emergency measures to reduce the nation’s power consumption this summer, including 20 percent power use at public corporations and imposing tripled power bills on businesses during the peak time of 2-5 p.m.

“The possibility of a massive blackout can’t be ruled out at the moment,” Industry and Energy Minister Yoon Sang-jick said.

Yoon called for full support from 20 local businesses at a meeting yesterday.

“Minister Yoon expressed regrets about inconveniences caused by the shutdown of the nuclear reactors and requested full support from energy-intensive industries like the manufacturing sector to prevent a national crisis,” the ministry said in a press release.

President Park Geun-hye spoke out on the nuclear reactor issue at a meeting with her presidential secretaries at the Blue House yesterday.

“The latest fabrication incident is unforgivable and unacceptable,” Park said. “It is a grave issue that takes its toll on the people.”

Park ordered a thorough evaluation into the incident and measures to root out outdated, corrupt practices in the nuke industry.

According to a JoongAng Ilbo source, the president expressed her displeasure when she was first told of the stoppage of the nuclear reactors on May 28, saying that such an incident could negatively affect the exporting nuclear of power plants to other countries.