With luxury sales lagging, big-name brands are branching out

With luxury sales lagging, big-name brands are branching out 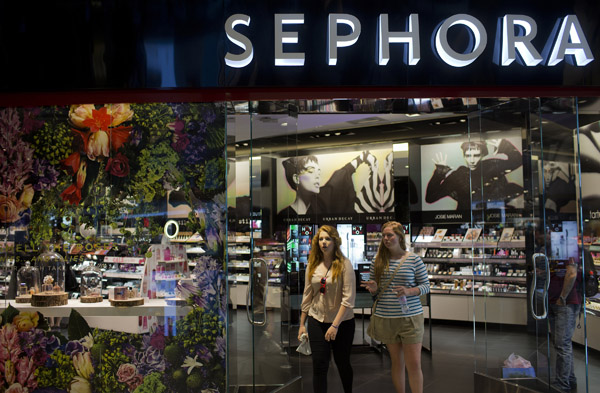 Shoppers exit a Sephora store at The Shops at Columbus Circle mall in New York on May 27. Sephora is LVMH’s fast-growing fragrance and cosmetics retailer. [BLOOMBERG]

“They don’t have any appeal,” the 18-year-old art student said of the label’s $1,340 monogrammed handbags while shopping on the Champs Elysees in Paris.

With Vuitton’s sales growth slowing from Barcelona to Beijing, catering to beauty buyers like Le Sassier is getting more important for LVMH. As shoppers curb spending on $940 Neverfull bags while splurging on $31 Dior Addict lipsticks, Sephora will help LVMH’s Selective Retailing unit overtake fashion and leather goods as its biggest business by 2018, Sanford Bernstein estimates. That leaves LVMH better placed than rivals such as PPR SA to weather stagnating luxury demand.

“Sephora is a category killer,” said Sanford Bernstein analyst Mario Ortelli. Investors concerned that sales of the Vuitton brand will keep fading are “overcautious about LVMH.”

The owner of more than 60 brands - from Dom Perignon champagne to Bulgari jewelry - LVMH in April reported its weakest fashion and leather goods sales in more than three years. Its shares are down 1.6 percent in Paris this year, versus a 19 percent advance for PPR and a 20 percent gain for Cie. Financiere Richemont.

Ortelli recommends buying LVMH shares and holding PPR. LVMH revenue is set to advance 7.5 percent this year, according to estimates. That’s faster than the 5.2 percent growth analysts predict for PPR.

PPR, by contrast, is getting out of mass retail. The company aims to spin off its Fnac media and electronics chain and dispose of online fashion seller La Redoute this year. It’s also closing stores at sporting-goods maker Puma SE as it combats declining nonluxury sales.

Slowing luxury demand isn’t unique to LVMH. After binging on goods from Rolex watches to Hermes Birkin bags, shoppers have cut spending as the economy splutters. Consumption is weaker in Europe, Taiwan and Korea, and “China isn’t as buoyant as it was two years ago,” PPR Chief Financial Officer Jean-Marc Duplaix said in April after its Gucci brand reported its slowest sales growth since 2009, excluding currency swings.

Yet Sephora and DFS keep growing. New stores in Shanghai and Hong Kong fueled a 17 percent gain in first-quarter comparable sales at the Selective-Retailing division as the region’s nascent middle class splurged on goods like Bobby Brown cosmetics and Johnnie Walker whisky. LVMH declined to make executives available to discuss the business.

Providing a broad range of skincare and fragrances has been key to Sephora’s success since it was founded in 1969. Acquired by LVMH in 1997, it has become the world’s biggest beauty retailer, with about 1,300 shops in 27 countries. Sephora plans to open about 120 stores a year through 2017, Sanford Bernstein estimates.

At Sephora’s outlet on the Champs Elysees, products such as 30.30-euro Dior “Iconic” false eyelashes sit a row down from the retailer’s house-label 9.90 euro extensions. Well-known brands, loyalty cards and services such as nail bars near the entrance lure shoppers inside, while arranging merchandise by category lets clients choose from similar products at a wide range of prices.

It’s a similar story at DFS. The company was founded in the 1960s, and LVMH bought a stake in 1996. Today, the retailer distributes more than 100 brands, from Juicy Couture to Absolut vodka, in 14 countries. New and upgraded stores at airports and in downtown shopping districts, where travelers can buy goods and claim back value added tax when they leave the country, mean “DFS is well positioned to benefit from growth in Asian tourism,” said Magali Dubreil, an analyst at researcher Planet Retail.

While Selective Retailing’s earnings before interest and tax will expand 24 percent annually through 2017, three times the pace of LVMH’s fashion and leather goods’ division, according to Sanford Bernstein, it’s less profitable than other parts of the company. Vuitton alone accounted for more than half LVMH’s 5.9 billion euros of Ebit in 2012, Exane BNP Paribas estimates. Selective Retailing’s profit was 854 million euros last year - 14 percent of LVMH’s total.