The Venezuelan-American designer has dressed women from all walks of life over the past three decades, from style icon Jacqueline Kennedy Onassis, the former first lady of the United States, to Hollywood darlings such as Jessica Alba and Katie Holmes. Fictional character Bella Swan is also on the list as she walks down the aisle with her vampire hubby in “Breaking Dawn Part 1” (2011) of the “Twilight” series.

Herrera was a sensation when she broke onto the fashion scene in the 1970s as an impeccably well-dressed socialite who ruled New York’s high society with her artist friend, Andy Warhol. In 1980, when she was 41, the launch of her fashion label, Carolina Herrera New York, also was an instant hit.

“My philosophy is making women more beautiful and men more handsome,” Herrera said at the Asia Fashion Exchange (AFX), Asia’s biggest fashion event, which was held from May 13 to 19 in Singapore.

Herrera’s fashion empire has grown steadily. From her high-end label targeting the upper crust of New York, to her bridal collection, eyewear, perfume, children’s clothes and ready-to-wear CH Carolina Herrera, the 74-year-old designer has been tirelessly captivating fashion-conscious people and updating their wardrobes. And surely, this fashion heavyweight has nothing to prove, but she keeps walking her own way and people are still following her.

Now Herrera is setting her sights on the Asian market. “I have a lot of interests in Asia. I think Asian women are always in love with fashion,” said Herrera, who has a great love for Korea, during a recent interview with the Korea JoongAng Daily.

Clad in a nautical striped blouse with creamy ivory and navy colors and wearing mother of pearl earrings, she was elegant, poised and sometimes straightforward yet humorous.

For her first Asian flagship store in Cheongdam-dong, southern Seoul, Herrera came up with the idea of decorating the store with hanji or traditional Korean paper made from mulberry trees. The Seoul flagship store opened last year. 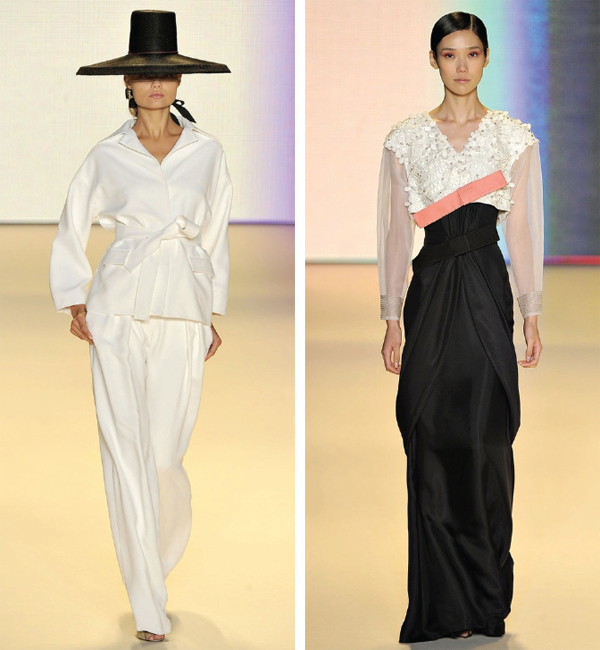 Q. It seems like you are expanding your presence in Asia. Of many Asian cities, why did you choose Seoul for your first store?

A. I have a lot of interests in Asia. The reason we chose Seoul was it was the first place we’d like to open and we love the location. We used paper for the walls, the thousand-year-old technique of hanji, for the Seoul boutique. I’m very happy because we try to use something local at each store we open.

The Asian fashion scene is getting a lot of attention. What do you think about the fashion style of Asian women, especially Koreans?

Asian women like luxury, logos and names. I think they are always in love with fashion. It (Seoul’s presence in the fashion scene) is so big so the whole collection (of 2011 spring and summer) was dedicated to Korea. I love the elements.

Tell us more about your 2011 spring and summer collection of Carolina Herrera New York. How did you end up using Korean elements such as the shape of hanbok (traditional Korean garment) sleeves or the Korean hat “gat” that was worn by men hundreds of years ago?

I saw books and paintings (about them) and I investigated the library because I wanted to have that special look. I loved the hats. I translated them for the shows because I thought they were really elegant. It was a very successful collection and it is one of my favorites.

I heard some of your seamstresses working in New York are Koreans.

Korean women have the most fantastic hands. A lot of Korean seamstresses work in the atelier and I’m very fond of them. They work so hard and they are always very quiet. I’m always fascinated what they eat for their lunch because they bring their own lunch. (Laughs)

You’ve made it big in the States but you were born and raised in Venezuela. Do your roots affect your design in some ways?

Every woman wants to be beautiful, but it often comes with a price. Do you think it is possible to achieve beauty and a sense of elegance with clothes from streets or fast fashion brands?

Yes! You can’t buy elegance. You see women who have a lot of money to spend and they buy everything they see but they are not attractive at all. But some women who have little money are so elegant because they put things together in a perfect way that looks good on them. Elegance doesn’t have anything to do with beauty and money. It has something to do with something inside them. Also, elegance is not the way you wear clothes. It’s the way you think, move and talk; your taste in books and home. It’s a big combination of things that makes somebody elegant. Women have to know themselves very well. Some women like to be fashionable even if they don’t look well. It’s more important for a woman to wear something that suits her than becoming fashionable. Otherwise, you become a fashion victim. 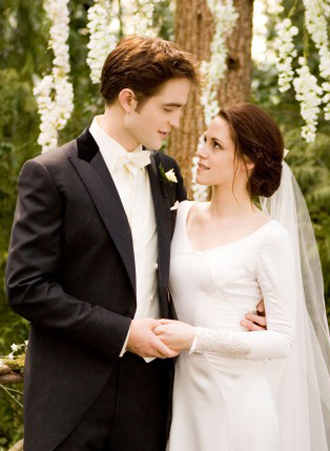 Herrera is famous for her bridal collection, including a wedding gown worn by actress Kristen Stewart, bottom in screen capture of “Breaking Dawn Part 1” (2011) of the “Twilight” series.

You told one interviewer that young designers have to separate the creative side with the business side. But you still lead your fashion empire. What aspect of your leadership enabled you to make your brand so big?

I don’t belong to the business at all. Never. I’m not the president of the company. I’m the face of the brand. I design and create. I do everything but I don’t care about the numbers. I don’t even know how much the clothes are. I have a team for that. I think it should be separated because your creativity stops when you have to think about prices.

You often told the media that you were a little girl who was more interested in horses than fashion. But you frequently recalled well-dressed and elegant women around you. Tell us more about your mother and grandmother.

They never discussed fashion with me and my sisters. Fashion was normal for them. They used to go to Paris and get their clothes. Now a little 3-year-old girl chooses what she’s going to wear, but we were not allowed to do that.

We were dressed the way my mother or nanny said. It’s not like today. I was very lucky because they were very well-dressed and beautiful and they got clothes from haute couture and that trains you a little bit.

You’ve been working in the fashion industry for 33 years. How is it possible to create something all the time?

It’s easier. When you do more, you want to do more. It’s all about proportion, colors and how to mix them and make them.

There’s this library in my head. I’m always inspired to do something. I have a photographic memory. It’s like a camera. You have to keep your eyes open and keep looking around. You have to have curiosity.

What is your design philosophy?

It’s very important to design for the time we live in. Some collections are based on the 20’s, 30’s and 40’s, but you can’t dress women like they used to dress in the 20’s. It looks ridiculous. I don’t like retro. I like everything to go on.

It’s not possible to do that. How can you prove it? You have to spend a lot of money with lawyers.

But all designers work for Zara because they copy what we do and sell them at different prices. We all work for Zara for Zara to be successful. (Laughs) I pass by New York and see my collection in Zara’s windows. I feel very flattered because I must be doing something right.

What is “that” item you always buy one after another?

I buy white shirts. I like them. I make them a lot. I also buy from other brands. The white shirt has to be crisp, well-ironed with a little bit of starch. They should look very crispy and new.

Is there a fashion item that you hate to see on women walking in the street?

There are a lot. I hate leggings with little short jackets because it’s usually worn by fat ladies with cellulite. They need to buy a full-length mirror.

How often do you spend your time with your family?

I spent a lot of time with my family. I stay at the office from 9 a.m. to 5 p.m. If you can’t do that, you’re very badly organized. I have four daughters, 12 grandchildren and two great-granddaughters.

Three grandchildren live in Buenos Aires, three in Madrid and four in New York. I’m going to Madrid to see some of my grandchildren (after the AFX). When they are all together, it’s fun.

Launch of CH Carolina Herrera in 2001

Launch of bridal and perfume line in 1987