Hanwha Life has the inside track to acquire ING

Hanwha Life has the inside track to acquire ING 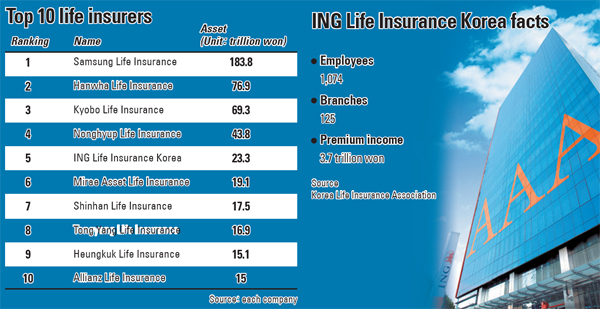 The race to find a new owner for ING Life Korea is under way and all eyes are on the contenders to see who will take win the nation’s fifth-largest insurer.

“For the past 10 years, the market share difference between Hanwha and Kyobo was as high as 1.3 percentage points and as low as 0.5 percentage point,” said an industry insider. “If either Hanwha or Kyobo bags the ING Life Korea deal, it will inherit the company’s financial stability as well as a stable customer base as it has mainly sold coverage insurance to the middle class.”

Industry insiders involved in the sale suggested the deal has technically become a two-horse ride between Hanwha and Kyobo, because financial authorities have expressed concerns about private equity funds’ acquiring the insurer.

Others suggested Hanwha has the edge because it has offered more than Kyobo.

“The minimum acquisition price is estimated to be 2.2 trillion won and a company that submitted higher amount is likely to secure an advantage,” said an industry insider.

A preferred bidder is expected to be announced this month with a final decision two to three months later.

Dutch banking giant ING Group put its Asian insurance and asset management operations up for sale because it was ordered by the European Commission to divest its global insurance arm in return for aid it received during the 2008 financial crisis.

Some suggested a bumpy ride is expected for Hanwha as ING Life Korea’s labor union strongly opposes a Hanwha’s acquisition.

The National Tax Service launched a probe of Hanwha on Friday.

Hanwha Group Chairman Kim Seung-youn’s absence is also deemed another hurdle. The group runs the conglomerate and its affiliates under emergency management because Kim is in jail for embezzlement.

Cha Nam-gyu, president and CEO of Hanwha Life Insurance, said the tax watchdog’s probe will have no impact on the ING Life Korea acquisition deal.

“We were scheduled to get a regular tax probe in June,” Cha said on Friday. “The acquisition of ING Life Korea is needed for Hanwha Life’s future.”