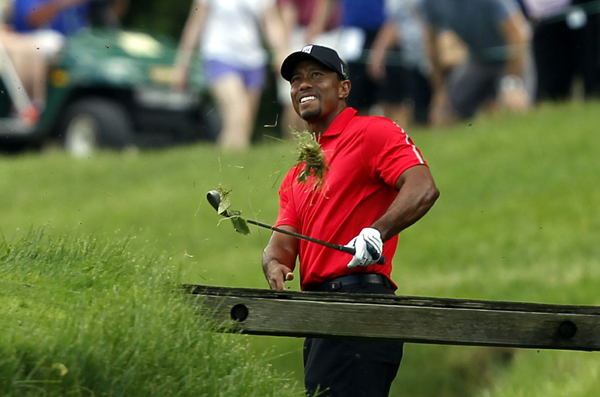 Tiger Woods of the U.S. hits his second shot from the rough on the 11th hole during the final round of the Memorial Tournament in Dublin, Ohio, Sunday. He finished tied for 65th in a field of 73. [REUTERS/NEWSIS]

DUBLIN, Ohio - Tiger Woods ended a largely forgettable week at the Memorial Tournament fading to a joint 65th in a field of 73, and conceding that he needs to clean up every aspect of his game before the upcoming U.S. Open.

A five-time winner at Muirfield Village Golf Club where he was the defending champion, Woods struggled with his putting on lightning-fast greens for all four rounds as he finished a distant 20 strokes behind winner Matt Kuchar.

Though his accuracy off the tee was surprisingly good throughout the tournament, Woods totaled 119 putts during the week and paid a hefty price after running up big numbers on certain holes at a venue he knows as well as anyone.

“It happens,” Woods told reporters after closing with a level-par 72 at Muirfield Village to finish at eight-over 296, the second-highest score of his career. His highest in a 72-hole event was 298 at the 2010 WGC-Bridgestone Invitational.

“It happens to us all,” said world No. 1 Woods, who had triumphed three times in his previous four starts on the PGA Tour. “I will go home next week and practice.

“It’s just one of those weeks. This week I obviously didn’t putt well. I had bad speed all week. I thought the greens didn’t look that fast, but they were putting fast. I could never get the speed of them.”

The second major of the year, the June 13-16 U.S. Open at Merion in Ardmore, Penn., is fast approaching and Woods gave a succinct reply when asked which areas of his game needed improving.

“Everything,” said the 37-year-old American, who won the most recent of his 14 major titles at the 2008 U.S. Open. “You want everything clicking on all cylinders, especially at the U.S. Open, because everything is tested in the U.S. Open.”

Woods began the final round among the back-markers for a second day in a row and ran into trouble when he triple-bogeyed the par-3 12th after taking two shots to escape from a terrible lie in a greenside bunker, then three-putted.

“I was just trying to put the ball against the face on the upslope on the other side so I had a chance to spin the next one,” he said of his first bunker shot. “And it actually rolled back on the bottom where there’s no sand. I hit a decent shot and obviously it skipped by. And the first putt was awful, just bad speed. The second putt I pulled, as well.”

Woods dropped another stroke at the par-four 14th before finally being rewarded with a birdie at the par-5 15th, where he struck a wedge to four feet and buried the putt.

Woods had astonishingly recorded a bogey and two doubles there in the three previous rounds.

“I birdied in a conventional way, I guess,” he said of the 15th. “With a wedge in there to about three-and-a-half feet behind it.

“Other times (this week) I had a chance to go for it (the green in two) and knock it on there and I didn’t make very good shots.”