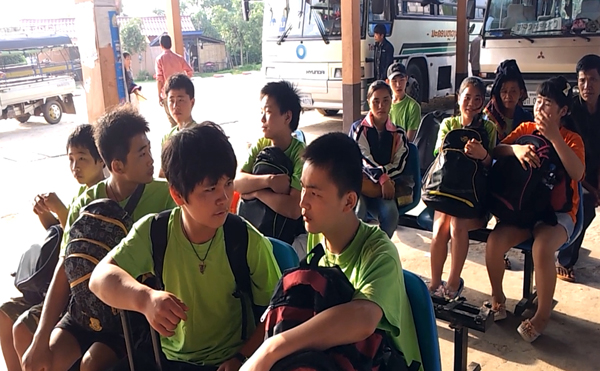 Former lawmaker Park Sun-young, also a human rights advocate for North Korean refugees, disclosed a video clip of nine North Korean defectors, in green and orange shirts, who were sent back to the North from Laos. The clip captures the moment right after the nine minor defectors were stopped by an inspection. [NEWSIS]

In the wake of the forced repatriation of nine North Korean youngsters, civic activists for North Koreans’ human rights said it wasn’t the first time that the Korean Embassy in Laos had been incompetent in dealing with defectors.

Ha Tae-keung, a ruling Saenuri Party lawmaker and a former civic activist, convened a press conference with some other defectors and said that, so far, defectors from North Korea have been mostly neglected by the Korean Embassy in Laos.

Citing 12 similar cases to prove their claims, Ha said, “The recent case of the North Korean orphans forcibly dragged from Laos was prompted by the Korean Embassy’s negligence.”

For instance, they said in July 2006, nine North Korean defectors were arrested by Laotian security guards in Oudomxai, a region that shares part of its border with China.

In the end, the activists managed to release the defectors through paying fines with the Laotian officials out of their own pockets.

To better protect North Korean defectors from the forced deportation and other human rights abuses during the journey, they demanded South Korea’s National Assembly pass the so-called “Bill for human rights of North Korean people” which has been pending in the legislature for eight years.

“So far, North Korea hasn’t shown any interest in the defectors fleeing through Southeast Asia,” Ha said. “But this time, the quick deportation must have been ordered by North Korean leader Kim Jong-un to try to prevent further defection through the region.

“This kind of crackdown on defectors could be expanded to other routes,” Ha said. “Taking this incident as an opportunity, the legislature must pass the bill for the human rights of North Korean defectors.”

With the beginning of the National Assembly’s special session yesterday, the issue of North Korean human rights is once again looming among lawmakers in Seoul.

Hwang Woo-yea, chairman of the Saenuri Party, urged lawmakers to “make progress” in passing the bill.

“We should make a significant advance in improving the human rights of North Koreans on a legal basis,” Hwang said at a meeting with the supreme councilors of the party yesterday. “We should make progress in protecting the safety of defectors through passing the matter of the bill for human rights of North Koreans at the extraordinary session of the National Assembly in June.”

Still, it is uncertain whether the bill will pass at the session, due to protests from the largest opposition, the Democratic Party. Since the bill was introduced in 2005 by then-opposition Grand National Party, it has been pending in the legislature for eight years. What matters the most is that the bill provides more state subsidies for civic groups or “brokers” who help defectors flee from the regime. The DP members say that it could encourage more North Koreans to defect, which would unnerve Pyongyang and worsen inter-Korean relations. They also say the bill is irrelevant to the matter of repatriation of defectors.

For this reason, they have introduced their own bill, dubbed “a bill for improving human rights of North Korean people.”

President Park Geun-hye said the recent deportation was “very regrettable” and the incident should be seen as a matter of “human rights of North Korean defectors.”

“The most important thing is to guarantee the lives and safety of the North Korean youngsters and prevent them from facing wrongful punishment,” she said at a meeting with senior presidential secretaries yesterday. “We should understand this incident not just as a matter of a diplomatic row between two Koreas or Laos and Korea, but as an international issue of human rights for North Korean defectors, and make as many efforts as you can through international organizations regarding refugees.

“I want you to come up with measures not to damage the main routes of North Korean defectors through the third country, including Laos,” she added.

Expectations were growing that Seoul and Beijing would discuss the matter of deportation of North Korean refugees at the two-day vice-ministerial-level meetings starting yesterday.

“So far, the strategic meeting has been conducted as closed-door,” a South Korean government official said. “They will discuss a variety of bilateral issues, including the visit of President Park to China and the recent repatriation of defectors.”