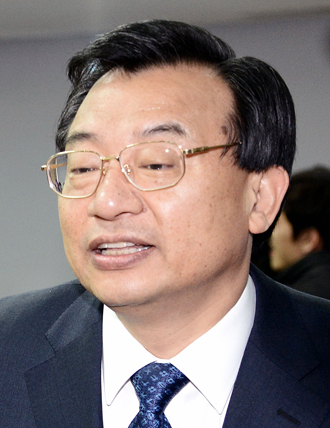 Lee, the former lawmaker with the nickname of Park’s mouthpiece, was appointed to make the job change inside the Blue House, after Park’s top public affairs aide Lee Nam-ki resigned over the disgraceful sexual scandal involving her former spokesman Yoon Chang-jung.

“Because the ability to communicate directly with the president is the most important for the senior secretary for public relations, Lee Jung-hyun was appointed to the job,” said Kim Haing, presidential spokeswoman.

After ordering Lee to make his job change in the secretariat, Park still has two vacancies to fill in the Blue House. Lee’s original post as political affairs senior secretary became vacant, and Kim said yesterday nothing has been decided on finding a new aide but Lee won’t double the two roles.

Kim also said yesterday that no decision was made yet on appointing another spokesman to fill Yoon’s vacancy.

During Park’s trip to the United States last month, her spokesman Yoon became a target of an American police investigation over his alleged sexual assault of a Korean-American intern. Yoon’s immediate supervisor Lee Nam-ki tendered his resignation on May 10 and Park accepted it on May 22.

Lee Jung-hyun is known as one of Park’s closest confidants. A politician from Gokseong, South Jeolla, Lee has been Park’s ally since 2004.

In the 2007 presidential primary of the Grand National Party, the predecessor of the Saenuri Party, Lee acted as Park’s mouthpiece.

He became a proportional lawmaker in 2008 to serve his first term. Last year, he ran in Gwangju, the stronghold of the Democrats, but suffered a bitter defeat.

At the time, he garnered 40 percent, a surprise outcome for a Saenuri candidate. Lee was still named a member of the Saenuri Party’s Supreme Council last year and served as the public affairs chief of Park’s presidential campaign.