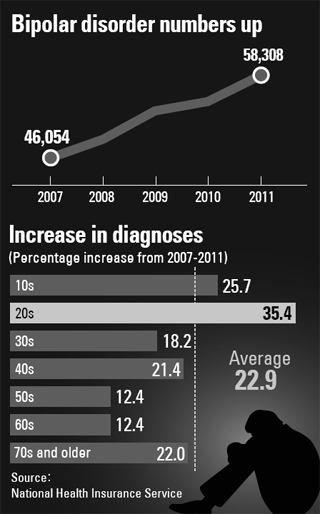 The number of people diagnosed with bipolar disorder has increased by 22.9 percent over a five-year period from 2007 through 2011, reaching 58,308 from 46,054 in 2007. The increase was particularly acute for people in their 20s, whose age group posted a 35.4 percent increase in the number over the five-year-period, the National Health Insurance Service reported Monday.

A bipolar person experiences severe swings in mood, from deep, long-lasting depression, to high, manic periods of energy. The exact cause of the illness is not known, but emotional stress, anger and hormonal imbalances in the brain are generally thought of as triggers that can bring about the changes.

According to the state-run health institution, 134 per 100,000 persons in their 20s were diagnosed as bipolar, a significant increase from the figure recorded in 2007 at 96.

Experts attribute the Korean social structure in which people are under great pressure and stress to thrive in a competitive society to the increase in the number of people with the disorder. An increasingly tightening job market for 20- and 30-something job seekers also have contributed to the increase in numbers.

“With a change in social and corporate culture that more focuses on competition, workers in the 20s who just began to work are more prone to experience emotional stress [than in the past],” said Dr. Choi Jung-won of the mental health department at the National Health Insurance’s Ilsan Hospital.

The state-run institute also pointed out that those without jobs are twice as likely to suffer from the disorder than the employed, with 200 per 100,000 persons found to have developed the illness in 2011. For those with jobs, 102 per 100,000 had the disorder.