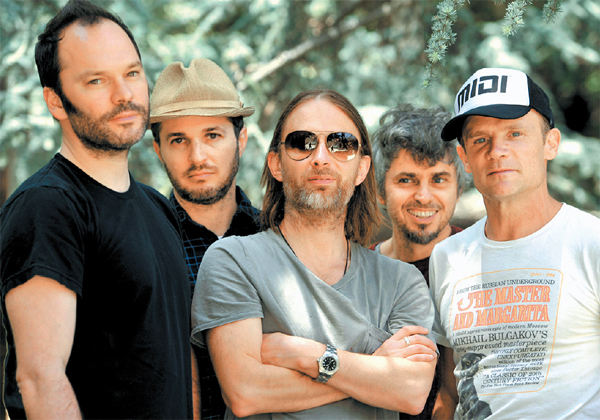 Members of Atoms For Peace, from left, Nigel Godrich, Joey Waronker, Thom Yorke, Mauro Refosco and Flea, will launch a 27-date world tour in July starting from Europe and will reach the U.S. in September before ending in Japan. AP

LOS ANGELES - Southern California has been good for Thom Yorke.

It’s the home base for his 4-year-old band Atoms For Peace, meaning he’s not only making occasional tough cross-continent commuter flights from the United Kingdom but also hiking up to Griffith Observatory and surfing with Atoms bassist Flea of the Red Hot Chili Peppers. The very English Radiohead frontman said Los Angeles was steadily working its magic on him.

“I find it hard to work in Britain all the time,” Yorke said. “Because I’ve grown up with it and it’s what I know. And I’ve also grown up with the cynicism that’s in the genes. Sometimes it’s good to try and wash that out. Generally in my work, it’s really helped me a lot. And it’s fed back into the Radiohead thing, too. Maybe it’s just getting old but I’m loosening up with all my .?.?. stupid rules about what works, what doesn’t work.’’

The resulting album, “Amok,” was released in February and blends Yorke’s distinctive tenor vocals with complex layers of rhythm. A week after getting back together to rehearse for an upcoming tour, Yorke and Flea sat together at a picnic table last week outside their rehearsal space.

They’re less of an odd couple in person than you’d expect, finishing each other’s thoughts and reminiscing about their first meeting at a festival some 15 years ago.

“You gave me a lift to the stage, that’s right,” Yorke told his bandmate, laughing.

For everyone involved, who made their names performing with other groups, Atoms For Peace “feels like a musical vacation, like going on a field trip,’’ Flea said, smiling between sips of tea.

As rehearsal began, band members struggled to match the electronic sounds and skittering beats that Yorke had blended with their original playing.

“When I first heard the record, I didn’t know what I played on or what I didn’t play on,” Flea said. “It’s something getting interpreted from a live thing into an electronic creation. And it’s being reinterpreted again for a live band, which is what we’re doing now. It’s kind of fascinating to see what happens. .?.?. There were moments where I was like, ‘Is this feeble now?’ But yesterday I just felt like it was magical. There were just moments when I just felt like I was floating on a groove.”

The band’s 27-date tour begins in July in Europe and will reach the U.S. in September before ending in Japan. It follows a more limited 2010 tour, all much more than was originally planned for the group, named by Yorke - whose father was a nuclear physicist - after a 1953 speech by President Dwight Eisenhower.

“It was quite fun anyway because it was no biggie,” he said. “We had one gig planned at the end of it. If it wasn’t going to work out, then fine. But I was just amazed at how sort of slinky the grooves got.”

And could those slinky grooves be evolving into another standalone project for the always-exploring singer-songwriter?

“No. I’m deliberately not talking about any new ideas right now because I think all our heads would collectively go pop,” Yorke said, taking bites from a banana. “No believe me, I’m restraining the urge to like go into the studio and try to do some more stuff. I’m very happy to start things and not finish them, forever and ever.”

“I’ve grown up with a sense of sort of snobbery to someone who just stands on a stage with one interface and a laptop. That’s it?! But he completely flipped my mind about that,” Yorke said. “Because actually watching what he was doing and everything, it was like, OK, now I get it. It turned me on to that idea much more. The next generation will come up. And all the rules that you’ve made for yourself, they don’t give a [expletive].’’ AP