The broken dream of a biker

The broken dream of a biker 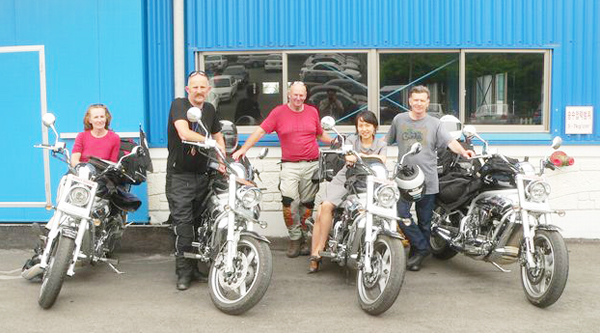 In the 1963 classic “The Great Escape,” Steve McQueen jumps over a barbed wire fence on a motorcycle and runs away from the Nazis. The famous scene must have inspired a foreigner to cross the military demarcation line of Korea. Of course, he is not going to jump over the fence. Instead, he wants to ride his motorcycle across the Demilitarized Zone.

Sixty-year-old Gareth Morgan is a businessman, philanthropist and traveler from New Zealand. Already a celebrity in New Zealand and Australia, he made headlines earlier this year with a campaign to eradicate the domestic cat population to protect wildlife. Traveling around the world on a motorcycle, he visited Korea in 2006. He rode a Korean bike and traveled 3,500 kilometers (2,175 miles) with four others, including his wife and two friends, all across the country.

When he stopped at the border region, he became interested in North Korea. Especially when he toured the 2nd Underground Tunnel, he was tempted to go to the North right away.

Earlier last year, he went to Pyongyang with his wife. Then he began to plan a bike tour from Russia to South Korea, via North Korea. It is an ambitious route from Mount Baekdu. His justification is to pray for peace in time for the 60th anniversary of the DMZ. Last month, he moved bikes for his six-member group to Russia.

After spending hours wondering why Seoul refused to accept his idea, he is instead considering an alternate route, to begin the tour from the North Korean side of the DMZ, travel through China and enter South Korea.

But he needs to rethink the meaning of the DMZ. It is a painful wound in Korea’s modern history, and young Korean soldiers defend the DMZ day and night. The Korean government would not welcome some foreigner riding a motorcycle across the Demilitarized Zone.

Also, the government has a lot to consider in terms of inter-Korean relationships. If we allow an adventurous foreigner’s bike tour across the DMZ, the solemn reality of the Korean Peninsula may look like a joke. There are already enough variables in the inter-Korean relations, and we don’t want unnecessary trouble. Also, just as the Embassy explained, the safety of the group is also a concern.

Nevertheless, it is not necessarily a bad thing to draw international attention to the DMZ. President Park Geun-hye has made a proposal to create a world peace park in the DMZ, and it may seem out of step to reject a peaceful trip by a foreigner.

At a dinner with political news chiefs at major media companies last month, President Park explained her proposal: “Even if Seoul and Pyongyang want to do something, all the channels are blocked. So I thought it may be a good idea to take this good opportunity for the international community to participate and work together for peace - through the park,” she said.

While Park meant to bring about a breakthrough, we are still in deadlock. We seem to be stuck on repeat. We all hope the deadlock is broken and we can move on to the next phrase. Morgan’s bike tour and the following attention of the people around the world could serve as a glimmer of hope in a critical stalemate.