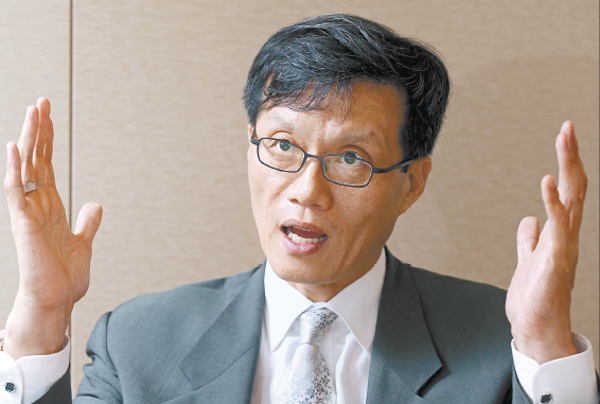 Depreciation of the yen will be a direct hit on Korean exports, which have been the driving force behind the nation’s economic growth.

Additionally, the right-wing movement and denial of past wrongdoing by Japan is only exacerbating the view of Abenomics as bad policy that is hurting Korea. However, Rhee Chang-yong, Asia Development Bank’s senior economist, in a recent interview with JoongAng Ilbo said otherwise. Rhee said that if Abenomics fails, it could bring about a mammoth crisis in Asia.

“The failure of Abenomics would mean a problem occurred in the Japanese treasury market,” Rhee said. “The best thing for Korea is for Abenomics to succeed and the yen depreciation adjusted through international cooperation.”

He also said Korea needs to change its economic paradigm, as growing exports does not necessarily mean more jobs or contribute to GDP growth.

Rhee graduated from Seoul National University at the top of his class in economics and received his doctorate in economics at Harvard University. He was vice chairman of the Financial Services Commission and was director-general of the G-20 organizing committee during the Lee Myung-bak administration.

Q. How should Korea look at Abenomics

A. Abenomics could turn into a huge threat to Asia’s financial market if inflation rises, which will raise long-term interest rates, and if it expands the Japanese government’s debt burden instead of contributing to the improvement of Japan’s economy.

If Japan decides to retrieve its investments overseas, not only will Asia’s economy nosedive, but even the greater global economy could suffer.

The fate of Asia’s economy now depends on the success of Abenomics.

Is Abenomics a benefit to Korea?

Instead of looking at Japan as a competitor, we have to view the situation in light of what could happen to Asia as well as the global economy. The influence that Japan’s economy has on Asian economies such as Thailand, Vietnam and Cambodia is huge. If Abenomics fails, the Asian economy will fall into a slump and this will disrupt Korea’s export markets, which will further affect Korea’s economic growth.

We shouldn’t approach Abenomics the same way we do the historic conflict between the two countries.

How far will the yen weaken?

The fact that the yen has weakened to 100 indicates that the value of the Japanese currency, which has been overly strengthened as a result of the U.S. and Europe’s excessive liquidity, is normalizing.

However, falling more than 100 creates new problems. When the yen’s value falls further, various countries’ anxiety will heighten. Even the Japanese government will not allow a freefall of its yen value.

There are some projections that the yen could fall to 120.

Even within Japan there are conflicting views over the benefit to the Japanese economy if the yen devalues beyond 100.

The situation in Japan is similar to Korea. Although many expect jobs to increase as a result of the yen depreciation, many major Japanese companies like Toyota have more production plants overseas. There is a limit to creating jobs within Japan.

In conclusion, it is difficult [for it to succeed] with only monetary policy. One thing positive [recently] is that Japanese society is uniting for the first time since Junichiro Koizumi was prime minister [in early to mid-2000s].

The government, businesses and mass media are in one voice. Although Korea and China are uneasy [of such movement], especially in regards to the history of conflict, it shows that a strong leadership has formed.

How should Korea prepare against the yen depreciation?

The most important lesson is that the time of securing competitiveness by depending on currency exchange rates has passed. Korea has to learn the strategy of Japanese businesses that survived through the yen appreciation since the 1990s. The government’s role in helping companies raise their competitiveness through controlling currency exchange will gradually decline.

What is the biggest threat the Korean economy faces?

At present there is no consensus on any issue, ranging from conglomerates, midsize and small businesses, growth and distribution, regional balanced development and the environment.

Unlike in the past, it is difficult to expect a swift and organized setting and execution of policies.

For example, let’s say the Korean economic development strategy is a horse, at this point there hasn’t been a consensus formed on whether Korea should switch the horse that it has been riding for another or stay on the current horse. While other horses from underdeveloped countries are catching up, there’s no guarantee the new horse would run as fast and strong as the previous one.

Do you think an export-driven growth strategy is no longer effective?

The possibility that conglomerates increasing exports would result in sufficient job opportunities for college graduates is slim. [Significant job creation] is only possible when small and midsize companies supply goods to overseas markets. A better solution is to send our best and brightest to find jobs overseas.

In what industries should Korea find its competitiveness?

This is simple. To which major did all our smartest and brightest apply? In the past they all went to engineering departments. As a result, we were able to raise the shipbuilding and information and technology industry. Today, they all go to medical schools. Including the medical industry, Korea now has a competitive edge in the service industry. We need to foster the service business.

After 20 years of economic stagnation, Japan is now rallying behind something new. I hope Korea does not repeat the mistake Japan has made. Korea needs to achieve a public consensus and build momentum toward building a creative economy.