After routing Pacers, Heat headed back to finals

After routing Pacers, Heat headed back to finals 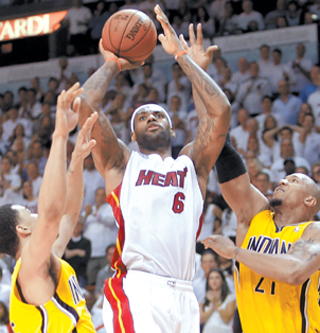 Ailing Dwyane Wade matched his postseason high with 21 points to help Miami to its commanding win in Game 7 of the Eastern Conference finals.

In the NBA Finals for the third straight year, the Heat will play the San Antonio Spurs in a series that starts Thursday in Miami.

“They’re just an amazing group of guys,” said Heat managing general partner Micky Arison, not long after handing the East championship trophy to Chris Andersen, who held it aloft as teammates standing around him celebrated. “They’ve given us an incredible season so far, but it’s a long way from over.”

The Heat had alternated wins and losses with the Pacers in the first six games of the series, and were coming off their worst offensive outing of the year in Game 6.

They responded with a rout, despite shooting just under 40 percent, well below their norm.

“By any means necessary .?.?. we took care of business,” James said.

Miami led by as many as 28 points, a shocking amount for a series that had an aggregate score of Heat 569, Pacers 564 entering Monday night. The Heat actually trailed by six in the early going, were still down 21-19 after the first quarter and it was starting to look like it was going to be one of those down-to-the-wire nights.

James exited with 5:08 left, shaking retired football star David Beckham’s hand as he made his way to the Heat bench for a relatively subdued celebration.

Not long afterward, security personnel started what’s become a familiar task in Miami - surrounding the court and stretching out a yellow rope, preparing to hold people at bay for the looming on-court trophy presentation.

“You never want to take anything for granted,” Wade said afterward. “Being here three straight years in a row, going back to the finals, is an amazing feat. I’m just glad we were able to do it. Everything that happened in the first six games didn’t mean anything to us. It was about tonight. It was about Game 7. It was about finding a way to win here at home.”

Ray Allen added 10 points for Miami, which earned its 78th victory of the season, matching the 11th-best single-season total in NBA history.

Roy Hibbert scored 18 points for the Pacers, who got 14 from David West, 13 from George Hill and 10 from Lance Stephenson. All-Star Paul George was held to seven points on 2-for-9 shooting and fouled out early in the fourth quarter.

George was the last Indiana player on the floor as Miami prepped for its postgame celebration, shaking any hand he could find before being walked toward the visiting locker room by Pacers coach Frank Vogel, who slung an arm over his star’s shoulder.

Not yet, though. Not with this Miami team built for titles. It’s the fourth trip to the finals for the Heat, who won the title in 2006 and have now been there all three years of the “Big Three” era, falling to Dallas in 2011 and then topping Oklahoma City in five games last year.

“The great thing is we’re a young team and we are past the building stage,” George said. “This is really our first year tasting success. The rate we are going, we see championships soon.”