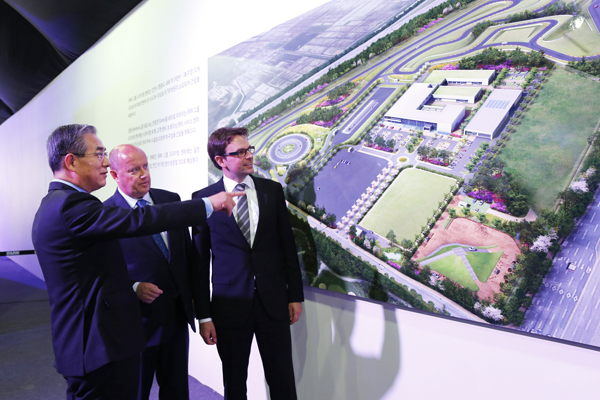 BMW Korea, the nation’s top seller of imported cars, held a groundbreaking ceremony for a driving center yesterday on Yeongjong Island in Incheon.

BMW has driving centers in the United States and Germany, and this will be its first in Asia.

Inside the center, BMW Korea will set up cultural and educational spaces showing environmentally friendly vehicles and technologies. It will also have restaurants, cafes and other galleries.

BMW Korea said its training academy will move to Yeongjong Island after the center is completed. Since the location is close to Incheon International Airport, BMW also said it will offer inspection and repair services for airline passengers. The company added that the 12,000-square-meter recreational park will be open to everyone.

“BMW Group Driving Center will have test operations next spring, and we expect more than 200,000 visitors a year,” said BMW Korea President and CEO Kim Hyo-joon. “The center will contribute to the nation’s effort to foster an automobile culture.”