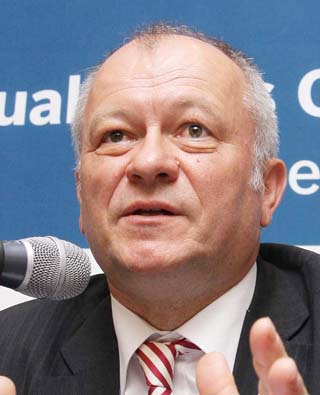 “We have some profitability issues in the corporate ladder,” Kaess said yesterday at the company’s Daejeon plant. “But in line with Bosch’s global strategy, we are looking to keep our traditional core businesses strong while leveraging new opportunities for long-term growth.”

“Through the expansion at Daejeon, we will be able to provide our customers in Korea with the latest technology for powertrains in gasoline as well as diesel that will further reduce fuel consumption and emissions,” Kaess said.

The 54-year-old German executive said the company is looking to diversify its business here. Last month, Bosch and Daesung Heat-Pump, an affiliate of Daesung Industrial, signed a development and product distribution agreement to enter the thermotechnology business.

The company is also working to strengthen its position in consumer goods. Last year, BSH (Bosch and Siemens Home Appliances) launched the capsule coffee machine Tassimo and other home appliances.

“We are looking at all opportunities,” he said. “Korea is one of the largest car-producing countries, and it is highly interesting for us to be here. I expect it [the Korean market] will be more important in the future because innovative companies like us are strong in highly efficient gasoline and diesel technologies.”