Chinese Army shows a warmer side to Seoul

Chinese Army shows a warmer side to Seoul 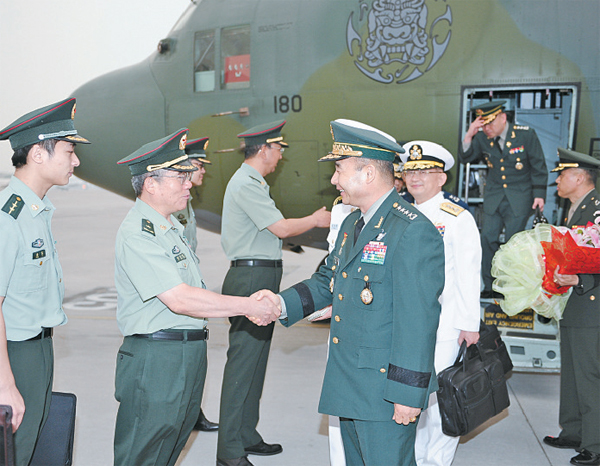 Ahead of President Park Geun-hye’s Beijing summit later this month, Korea’s top military chief met with his Chinese counterpart yesterday for the first time in six years to shore up military ties between the two countries.

The two sides will discuss “major military issues to deepen bilateral ties in accordance with South Korea-China strategic cooperative relationship,” the Joint Chiefs of Staff said in a statement.

Jung flew to Beijing on a C-130 military transport plane, a two-and-a-half-hour flight from the Seoul Air Base in Seongnam, south of Seoul.

This was the first time a South Korean military leader traveled on an official visit to China on a Korean Army plane. Previously, military officials flew on civilian aircraft.

“Allowing a foreign air force’s plane to enter its airspace is a great consideration,” a military official who requested anonymity said. “China, which has a special relationship with North Korea, made a big decision.”

July 27 marks the 60-year anniversary of the Armistice Agreement that ended the Korean War, and military analysts said Jung’s visit upon the invitation of Beijing held much significance because of the timing.

“In the Korean War, Korea and China opened fire at each other and were enemy forces,” the official stated. “Though it is only a two-day visit, it will be an opportunity for the strategic military cooperation to become strengthened.”

The last time the head of the Joint Chiefs of Staff of South Korea went on an official trip to Beijing was 2007, when Kim Kwan-jin, the current defense minister, visited.

Beijing and Seoul’s military leaders will discuss ways to encourage cooperation between the two countries, especially expanding military communication channels, such as a hotline.

The two countries extended their military personnel exchange program of 2011.

“There are no immediate issues to be taken care of” between China and Korean relations, another army official said. “The two sides will bridge gaps in ideas and come to a mutual understanding of the problems on the Korean Peninsula.”