Korea ekes out draw against Lebanon

Korea ekes out draw against Lebanon 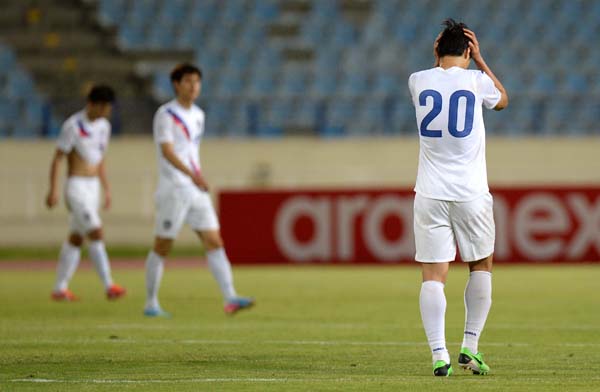 Hassan Maatouk gave the hosts a 1-0 lead in the 12th minute at Camille Chamoun Sports City Stadium, putting a lackluster Korea on the verge of its second straight loss at Lebanon after losing 2-1 in November 2011, before the 29-year-old FC Seoul midfielder netted a free kick five minutes into the stoppage time.

The 1-1 draw put Korea back on top of Group A, ahead of Uzbekistan on goal difference, but its bid for extending an Asian record of the most consecutive World Cup appearances is no sure bet. Iran is trailing one point behind after a 1-0 victory over Qatar yesterday.

Korea will have to earn at least four points in the two remaining qualifiers to secure a World Cup berth to Brazil on its own strength - and it soon will face the two strongest competitors.

Korea will host Uzbekistan at Seoul World Cup Stadium on Tuesday. It will then play Iran at the Ulsan Munsu Stadium on June 18.

Korea was held to a 2-2 draw by Uzbekistan in September before suffering a 1-0 loss to a 10-man Iranian team in October. Iran will host Lebanon on Tuesday while Uzbekistan hosts Qatar on June 18.

The two top teams from Group A will automatically get a World Cup berth, while the third team will have a playoff in September with the third-place team from Group B. The winner will then enter the international playoffs in November, where it will have to vie with a Latin American team for a spot at the World Cup.

The lack of tactics and sharpness displayed against Lebanon, which has almost become a hallmark of coach Choi Kang-hee’s 18-month tenure, left an indelible question on the leadership of the 54-year-old coach, who is keeping mum on his future as the national coach.

“We have prepared over the past week lest this kind of result should happen, but we ended up not getting a result that we wanted,” Choi said after the Lebanon match. “Surely, it’s the coach’s fault when they lose a game or make a sluggish performance. I think the players did their best to the end to win. It is a regrettable result, but we can’t help but to accept it.”

Many fans and commentators in Korea did not agree with his views on the players’ performances against the 129th-ranked team.

In particular, Lee Dong-gook, whose age outstripped his goal-chasing talent, came under fire for being idle on defense, which led to many goal chances for Lebanon.

Lee also squandered Korea’s biggest goal chance. The 34-year-old Jeonbuk Motors striker had a one-on-one chance against Lebanon goalie Abbas Hassan in the 44th minute, but his right-footer surged over the bar.

It was Lee’s eighth start in 12 games led by Choi, who was Lee’s coach at the Motors, and the coach’s preference for K-League players, including his pupil, over many younger strikers was blamed for creating a chasm in the chemistry of the Taegeuk Warriors.

Bundesliga star Son Heung-min sat on the bench until 23 minutes into the second half, when he was put in to replace 2012 Asian MVP Lee Keun-ho, a timing that Huh Jung-moo, the former Korean national team coach, said was too late.

Ji Dong-won, who contributed to Augsburg’s top-flight stay with five goals, was also sent in only in the 88th minute.

Koo Ja-cheol of Augsburg and Ki Sung-yueng sat out the Lebanon match after they were left off of the 25-man roster that will also cover the two remaining qualifiers.

Korea is facing a strong challenge from Japan to be the Asian representative at the World Cup. Korea has advanced to the past seven World Cups, putting it behind only five countries, Brazil (20 times), Germany (15 times), Italy (13 times), Argentina (10 times) and Spain (nine times). However, Japan is catching up as it already secured its fifth straight World Cup berth with a 1-1 draw with Australia on Tuesday.

Kim Ho, a football commentator for Ilgan Sports, said even if Korea makes it to the World Cup for the eighth straight time, it has to go back to basics and depart from the glory of the 2002 World Cup semifinalists.