Giving the homeless a second chance

Giving the homeless a second chance 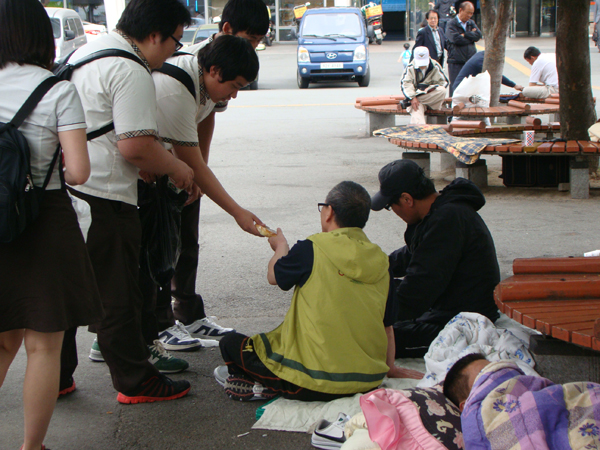 Volunteers for Nanum Community, a nonprofit organization dedicated to helping the homeless, give out clothes and shoes at Busan Station. Provided by Nanum Community

Song Ju-hyun, 26, is quite popular in his hometown, especially around Busan Station. It’s in that area that homeless people tend to congregate, and Song warmly calls them “mother” and “father” without hesitation. In turn, they call the young man “loving son” or even “angel.”

For three years now, Song has assisted the homeless in his city. Some of his efforts are more traditional - donating staples like meals and clothing - but he has made a name for himself by offering housing as well.

The organization covers rent and offers a living allowance for one month so that the residents can look for work without having to worry about where to sleep, how to wash up and what to eat. Among them, six found jobs almost immediately and have become independent, paying the monthly rent on their own.

Song argues that homeless people find it difficult to adapt to group life in homeless shelters and often waste the day by drinking away their sorrows. Offering rooms for rent is one way to break this vicious cycle.

The Korea JoongAng Daily recently asked Song about his efforts. Here are some excerpts from the interview:

Q. How did you become interested in homeless people and why did you decide to starting helping them?

A.A few years ago on Christmas, I went out with my girlfriend to do a good deed for the year. We wanted to share our love with those around us and while we were giving gimbap (seaweed rice roll) and socks to homeless fathers, I saw one father rummaging through a garbage can. He took out an empty cake box - I guess it was a Christmas cake one family had the night before - and started licking the hardened whipped cream. I was lost for words and decided at that point to do everything I could so that homeless people don’t have to rummage through the garbage ever again. That’s why I decided to establish Nanum Community. It encourages young Koreans like myself to go out and help those around them. I give lectures across the country about helping others at schools and churches and also go out to meet with homeless fathers, mostly in my neighborhood in Busan. Nanum Community has thousands of members who have formed groups throughout the country.

You help the homeless by providing them with food, clothes and shoes, and for some, even a room at a goshitel (a tiny room) by paying rent for the first month or two. Why do you rent rooms?

I started off by providing meals. But starting from two years ago, I noticed that filling their stomachs was not enough. I had to see them stand on their feet again. In order to do so, I had to understand them. So I decided to experience their lives and went out to live among them on the streets. That’s when I realized the vicious cycle that traps homeless people. To sleep during the night, either to fight the cold or even the heat, they drink alcohol. They beg for money to buy alcohol and sleep at night under the influence of alcohol. To help them break out of this vicious cycle, I thought the most helpful thing would be to support them by renting a room and providing a little bit of money and daily necessities.

There are homeless shelters operated by the government and private organizations. Why don’t you encourage them to go to the shelters instead?

Living in these homeless shelters means they must adapt to group life. For most homeless people, it’s difficult to adjust to the rules and regulations. They tend to drink more with groups of friends just like they do at train stations. I think this lifestyle can break their will to become independent. After talking to homeless fathers, I realized that they feel inconvenienced in shelters, but if they have their own private space, they can take time to think and have freedom at the same time. Of course, there are advantages to living in those shelters. They have better facilities than goshitel such as kitchens and laundry facilities. And if the shelter is good enough, they have support programs as well. But going back to the mindset of these homeless people, they tend to struggle with the structure and end up hanging around together, drinking outside during the day and only going to the shelters to sleep. As time goes by, there’s less and less of a chance for them to stand on their feet.

Do you have a particular homeless father that you remember well?

I met one man about a month ago as I was going around Busan Station at night and giving out shoes for homeless fathers. While talking to him, I felt that he had a strong desire to support himself but that his circumstances just didn’t allow him to do so. Six years ago, he worked at a dockyard and earned a good living. So, he and his friend decided to start up their own business, but the business failed. All his property was repossessed, and he became a delinquent borrower. He lived on the streets ever since.

When we got him a room, he really wanted to express his gratitude, so I told him, “Father, work hard and help other homeless people like you.”

He called me about a week ago and told me that he wanted to buy me dinner. At the meeting, he handed me 600,000 won [$540], saying that he was not trying to repay his debt but rather wanted to donate the money to our community. He said he got a job a few days after I got him a room and that he was paid 1.1 million won for a month’s work. He gave me more than half of his salary. It’s like a miracle. He was homeless a month ago and is now helping other homeless men.

Landlords could be reluctant to open their rooms to homeless men. Did you have any problems when renting rooms for them? Did you have to disguise the tenants?

Of course I don’t rent a room for any homeless person. I talk to them, and I only rent for those with a strong will to stand on their own feet. At first, the landlords were quite reluctant because these homeless fathers were very dirty. So before I take them to the room, I take them to a public bathhouse, and buy them new clothes and shoes. I don’t lie or disguise them because most of the owners of goshitel already know me. They know what I do and that these men are homeless. I guess even though I go in with homeless men, they trust me because I tell them that I’ll pay the rent if they fail to pay the next month. Some owners even give me a discount because of the work I’m doing.