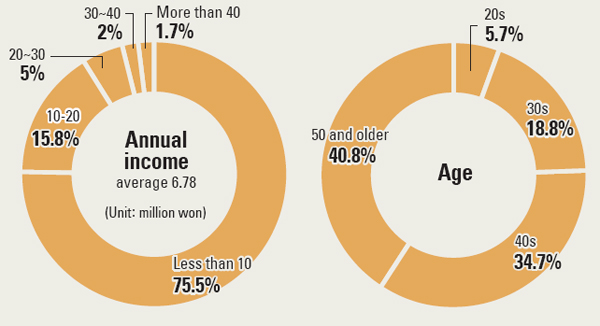 A 58-year-old surnamed Kim, who works as a taxi driver, has been a delinquent borrower ever since he received 10 million won ($8,961) from a capital company 16 years ago. He had no choice but to take the loan after he lost his job during 1997 Asian financial crisis.

Though Kim worked hard to pay back the principal and interest of his loan, he wasn’t able to handle snowballing overdue interest charges. He also was stressed by having to move frequently to avoid creditors.

A ray of hope appeared for Kim to recover his credit. Last month, through the government’s National Happiness Fund, he was able to have all of his interest and 70 percent of the loan’s principal written off. He now owes 3 million won that he can repay over 10 years.

Sunday marked one-month since the Park Geun-hye government started to receive applications from borrowers to help them write off their overdue debt. The fund is a debt adjustment program for struggling low-income households and it helps individuals regain good credit ratings.

The fund recently disclosed some information about applicants and recipients of benefits by randomly selecting 5,733 of 74,937 individuals who sent in applications and analyzing their debt volume, the period of overdue interest, their income and age. Based on the analysis, those who applied to receive funding had an average of 14 million won worth of debt and had been in arrears nearly six years. Applicants’ average yearly income was 6.78 million won.

“Most applicants were those in the low-income bracket that have been living as delinquent borrowers for a long time because they were not able to pay back 10 million won worth of debt,” said an official from the fund. “Unlike previous concerns that a possible moral hazard problem could arise, there were almost no debtors that did not pay back their loans just because they wanted to have the government write off their debt.”

According to the analysis, 39.6 percent of the applicants were in arrears for more than six years, while only 8.9 percent were less than a year behind in their repayments. Long-term debtors often are under a heavy interest rate burden as they turn to the nonbanking sector and loan sharks.

Though the National Happiness Fund has written off debts of 74,937 debtors over the past month, experts still note that the fund cannot be a fundamental solution to loan delinquency. They emphasize that there should be a permanent safety net.

“For example, from a long-term perspective, the government should restructure the financial system so savings banks and mutual banks provide low-interest loans to individuals, like the systems in Germany and Japan,” the researcher said.