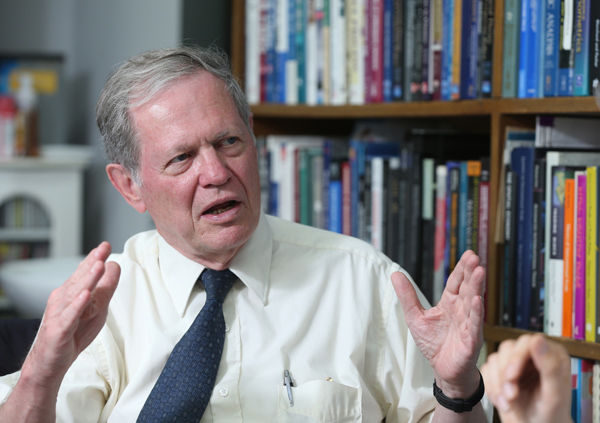 Richard Cooper, economics professor at Harvard University, said it is a mistake for Japan to use Abenomics only to target growth without an accompanying change in the country’s regulatory environment.

The 79-year-old veteran economist is known to have close ties with Koichi Hamada, a Yale University economics professor and the chief architect of Abenomics.

Cooper visited Seoul this week to deliver a lecture on Tuesday at Yonsei University after attending a conference on Abenomics in Tokyo last week.

“I think that it is too early to evaluate Abenomics, which has three arrows: monetary stimulus, fiscal stimulus and various changes in the country’s regulatory environment,” he said. “The monetary and fiscal stimulus will not change Japan’s growth rate in the long run.”

There has been contrasting evaluations of the Japanese government’s monetary easing policy since the Nikkei’s recent 7.3 percent plunge, which was the biggest fall in Japanese stocks since the Fukushima nuclear plant disaster in 2011.

The Harvard professor gave a 0.5 percent growth forecast for Japan in 2030, whose share of global GDP would dwindle by 4 percent compared to 2005.

“The role of the stimulus in my view is to create a buoyant economic environment in which structural changes can be made, in an environment where it is much easier for them to grow, even temporarily, than in an environment of austerity as the Europeans are discovering,” he said.

One example of a structural change on the list of things to be considered by the Japanese government is allowing corporate entities to enter the agricultural sector, the professor said.

“Allowing corporate entities in agriculture is currently prohibited. Agriculture can only be undertaken by individuals,” he said. “And we have reasonably believed from international experiences that agricultural productivity could be substantially enhanced by this change.”

He also said the low Japanese birthrate is an obstacle to economic growth.

“Japan has a demographic profile adverse to growth in GDP, and whatever Japan does in the area of Abenomics, unless it increases its birthrate significantly, Japan will have this drag on its GDP growth rate,” Cooper said. “It is a mistake for Japan to look at the growth rate as an objective of economic policy.”

Cooper criticizes those in Korea who presume Abenomics will affect the country in a negative way.

When the Brazilian finance minister first introduced the term “currency wars” in 2010, his concern was that the Brazilian currency was being driven up, and he thought it was bad for Brazil.

“His implied assumption was that without the quantitative easing, everything else would be unchanged. That was a wrong assumption,” he said.

“If Abenomics succeeds, not only will Japan be better off but also all of its trade partners will be better off, China and so on,” he said.

Cooper said Koreans need to take the long view to assess the effect of the depreciated Japanese currency.

“When it comes to the Korean won, I want to make two observations. One is a historical one, which is that Koreans tend to measure the change in the won from last November, but one needs to take a much longer view than that when the Japanese yen was vastly overvalued,” he said.

“If one goes back to 2005, well before the financial crisis, the exchange rate was about the same as it is now. So if you take an eight-year view rather than a six-month view, there has been nearly no change the yen-won rate.”

Secondly, no one is as influential as Korea itself in terms of its own exchange rate policy, he said.

“If you don’t like the exchange rate right now, take action that you deem appropriate to change it. But there are side effects that you have to take into account.”

In earlier talks with Yonsei University Prof. Sung Tae-yoon on an expected exit strategy by the U.S. government from quantitative easing, Cooper said it is important for the Korean financial authority to take pre-emptive measures.