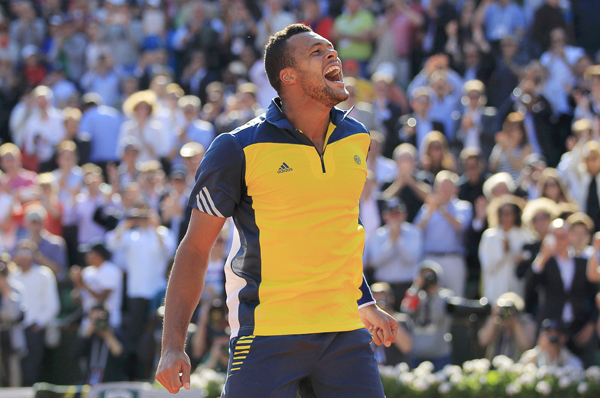 Jo-Wilfried Tsonga of France celebrates beating Roger Federer of Switzerland in their quarterfinal match during the French Open at Roland Garros stadium in Paris, Tuesday. [REUTERS/NEWSIS]

PARIS - Roger Federer calls Jo-Wilfried Tsonga a “great friend” but received no mercy from the Frenchman who swept him aside in devastating fashion on Tuesday to boost hopes of a first home men’s winner at Roland Garros since 1983.

An inspired Tsonga played like a man on a mission and Federer simply could not live with him, slumping to a chastening 7-5, 6-3, 6-3 French Open quarterfinal defeat in front of a spellbound crowd on a sun-drenched Philippe Chatrier court.

Meanwhile, Serena Williams has been on a mission ever since taking to the park courts in Compton and the 31-year-old moved a step closer to a 16th major singles title, which would be one behind Federer, as she beat Russian Svetlana Kuznetsova, 6-1, 3-6, 6-3.

The American top seed, who snapped a run of four successive quarterfinal defeats here since she won the title in 2002, will face diminutive Italian Sara Errani in the semifinals.

Fifth seed Errani continued to prove that last year’s final appearance in Paris was no flash in the pan as she edged past Poland’s Agnieszka Radwanska, 6-4, 7-6 (6) in what was her first career win against a player ranked in the top four.

In Tuesday’s other men’s quarter-final, Tommy Robredo ran out of escape routes as he was overwhelmed by fourth seed David Ferrer, 6-2, 6-1, 6-1 in an all-Spanish affair.

Tsonga has been part of the pack chasing the elite top-four of men’s tennis ever since bursting through to reach the 2008 Australian Open final, where he lost to Novak Djokovic. But he had never gone beyond the last eight in Paris.

When Federer wafted a backhand long on match point, the crowd erupted and Tsonga set off on his trademark celebratory leap, the tantalizing prospect of the 28-year-old going on to emulate Yannick Noah became the talk of the town.

Federer has suffered at the hands of Tsonga before, notably at Wimbledon in 2011 when the Frenchman, who has a passing resemblance to boxing great Muhammad Ali, bounced off the ropes to beat the Swiss great from two sets down.

That had been a real toe-to-toe contest, but this time Federer trudged off well-beaten, waving to the crowd and knowing his last chance of a second French Open title may have gone.

“I’m pretty sad about the match and the way I played,” Federer, one of four players 30 or over to reach the last eight here this year, said.

Tsonga, despite his dazzling brilliance on Tuesday, will have to reach a similar level against Ferrer to become the first Frenchman to reach the final here since Henri Leconte in 1988.

“He beat Roger playing beautiful tennis,” Ferrer, who has a 0-14 career record against Federer, but leads Tsonga 2-1, said.